If you are from the US, you might be surprised at how prevalent roundabouts are in most of the world. Outside of Carmel, Indiana which has 125 roundabouts, these are pretty unusual in the United States though have been gaining in popularity over the past decade. It turns out, that while a modern roundabout is safer and more efficient than other intersection types, roundabouts got a bad rap early on and so the typical US driver still has a lot of anxiety when approaching one.

Prior to 1966, traffic circles were a spotty thing. In some cases, they were just big circular junctions. In others, the right-of-way rules were difficult to figure out or there were traffic lights and stop signs that did not lead to a better or safer driving experience.

Enter Frank Blackmore. In the UK, he introduced the “Priority Rule” which — simply — mandates that traffic entering a circle must give way to traffic already in the circle. Blackmore worked out that this method increases traffic flow by 10%. Although this kind of roundabout became law in the UK in 1966, the US was slow to adopt, primarily due to negative public opinion. In 2016, there were about 4,800 modern roundabouts in the U.S while France and the UK have roughly 55,000 combined.

So what are the virtues of the modern rounabout, and where did it come from? Let’s take a look.

The modern roundabout has several features that were lacking on most older rotary traffic junctions. We already mentioned the priority rule. But a modern roundabout also requires cars to turn to enter the roundabout. This forces cars to slow and makes the intersection safer.

A roundabout is cheaper over the long run. There are no traffic signals to maintain and there is no power required. A single-lane roundabout can handle over 20,000 vehicles a day. The two-lane version can handle at least 40,000. Because there is less stopping and waiting, emissions are reduced, and the circles are more fuel-efficient, too.

Provably Safer For Cars, Less So for Cyclists 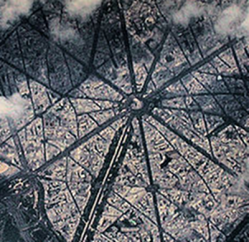 But the real pay off is in safety. Studies show that modern roundabouts are safer than other kinds of intersections for both drivers and pedestrians. A US study shows 39% fewer vehicle collisions, 76% fewer injuries and 90% fewer serious injuries and fatalities when an intersection changes into a modern roundabout. A New Zealand study did show, however, that bicycle/automobile accidents were higher at traffic circles.

It is a bit intimidating when you have a lot of streets feeding one circle. The Place Charles de Gaulle surrounding the Arc de Triomphe which has 12 roads feeding it. What really gets confusing is when you have multiple circles going different directions. The video below shows Swindon’s “magic roundabout” that has seven circles together!

You might consider this a civil engineering hack, but really we think the real interesting thing here is more social engineering. Just because you develop something better doesn’t mean people will flock to it. The US still won’t budge on using the metric system. The Dvorak keyboard remains an oddity (though it’s benefits may have been overhyped). People still write checks and use FAX machines. We still resist traffic circles.

Perhaps what Blackmore failed to consider is that in addition to tests showing the efficiency and safety of the roundabout, he should have also turned in a public relations campaign to convince people about the benefits. If you have the next great idea that will change everything, maybe you’ll take the Blackmore lesson to heart.

Usually, traffic circles don’t have lights, and we do like traffic lights. Especially the old fashioned kind.

111 thoughts on “Hacking The Road: Roundabouts”