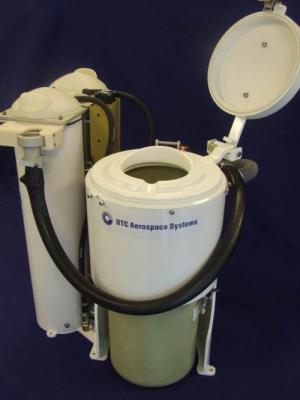 Though the current toilet still does everything it’s supposed to do, there is room for improvement. For instance, women find it difficult to engage both parts of the system at the same time, and almost everyone prefers the toe bars on the Russian toilet to the more encumbering thigh bars on the American throne. Also, the current commode’s interface is more complicated than it needs to be, which takes up valuable crew time.

The most intimate change is probably the seat design. In a weightless environment, it’s more like a hovering zone than a throne. According to the white paper (PDF), the UWMS seat has homing ridges and “includes a tailbone section to encourage crew cheek separation”. Maybe the vacuum works against separation? We’re not sure.

Although the new latrine wasn’t designed specifically for the ISS, the crew members will make excellent guinea pigs to test the new features. And they don’t have to send it back or anything — it will stay up there until it breaks, or until the ISS is retired, whichever comes first. A second unit is being built for those longer-term missions and will be installed on the Orion capsule, which is slated to return to the Moon in 2024.

32 thoughts on “The ISS Is Getting A New WC”