By now, I must have had my Miniware TS100 soldering iron for nearly three years. It redefined what could be expected from the decent end of the budget soldering iron spectrum when it came on the market, and it’s still the one to beat even after those years. Small, lightweight, powerful, and hackable, it has even spawned direct imitations.

If the TS100 has a fault, it comes not from the iron itself but from its cable. A high-grade iron will have an extra-flexible PVC or silicone cable, but the TS100 does not have a cable of its own. Instead it relies on whatever cable comes on its power supply, which is frequently a laptop unit built with portable computing rather than soldering in mind. So to use it is to be constantly battling against its noticable lack of flexibility, a minor worry but one that I find irksome. I determined to find a solution, making a DC extension cable more flexible than that on my power supply. 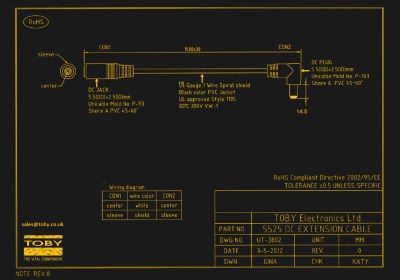 The TS100 has a standard DC barrel jack, but surprisingly it’s rather an unusual one. It requires an extraordinarily long reach of about 15mm, and the plugs on some laptop supplies won’t mate with it satisfactorily. For my cable I would have to find the longest plug I could, and it turned out that there are surprisingly few on the market. Lumberg do one, but it tops out at too low a current rating for a soldering iron so I was rather stumped.

I approached Toby Components, my go-to supplier for connectors who have helped me secure unobtanium in the past, to see whether they had any better options. And that was where this saga took an unexpected turn. They didn’t have any off-the-shelf connectors, but they could get their cable people to make up a custom extension using an extra-flexible PVC cable. I parted with some cash, and duly received a package containing a couple of their prototypes. My build-a-cable project abruptly turned into a product test.

The first thing I did was plug it in and do some soldering, at which it was fine, and noticeably more flexible than the stock cable on my PSU. But merely saying that doesn’t give much information, I need some means of quantifying the flexibility of a cable. We can all tell by feel that one cable is more or less flexible than another. Holding it in our hands, the less flexible cable requires more force to bend it than the flexible one. Researching standard tests for cables reveals a surprise, they have a focus on safety and stress performance rather than its static physical properties, so while there are a host of fascinating tests to ensure that they don’t fail under repeated flexing or when being pinched, the standards don’t seem to include a simple measure of flexibility. It deserved some thought, so I considered and rejected measuring the droop angle of a set length of cable under its own weight, wondered whether a test rig could be set up in which a horizontal cable could have weights attached to it, and finally arrived at something much simpler.

How Do You Characterise Cable Flexibility?

If you take a piece of cable and hold it between your hands, it forms a line with 180 degree angle. Should you now bend it, it won’t form a point as it takes a narrower angle, instead it will curve and tend towards a circular outline. You’ll find there is a natural minimum bend radius it will comfortably take, at which it forms the circular outline and readily returns to straightness, yet is not bent to the extent that it kinks. So measuring the natural minimum bend radius of a cable is a straightforward and easily-reproducible test that can allow comparison of cable flexibilities.

My bend radius rig is simple enough, a flat piece of wood with another slim piece of wood held above its edge using a pair of screws. The cable is bent at 180 degrees back upon itself to form a loop of its minimum natural radius, then it is clamped between the two pieces of wood, thus the diameter can be easily measured and the radius calculated. I’ve added a piece of graph paper on top of my wooden base so that I can easily judge measurements, however I found my caliper to be the most convenient way to take them. As well as the two TS100 cables I’ve measured a few others from around my bench for comparison.

It can straight away be seen that this is a readily reproducible way to characterise the flexibility of a piece of cable. At the extremes are the multimeter lead and the computer mains lead, no surprise as the former is designed to be as flexible as possible while the latter is a thick and heavy mains lead. That’s a cheap multimeter, it’s likely that had I been less miserly and bought a decent one it would have a significantly more flexible set of leads. The fake “Grundlagen Audio” USB lead from my April 1st sojourn into using GNU Radio for audio analysis meanwhile is surprisingly stiff for what was in reality a cheap Amazon Basics item. This is probably due to two factors; it has a braided outer in a bid to copy more expensive leads, and my spraying it with gold paint has only made it stiffer.

To the point of the test though, the TS100 cables. The Toby cable is under two-thirds the stiffness of the laptop-style power supply cable, which does make a significant difference to the ease of soldering. I didn’t expect to spawn a product when I asked them about connector availability, but if you’d like one they have it for sale on their website. And meanwhile, Hackaday now has another test in its armoury, measuring the bend radius whenever we take a look at a cable.