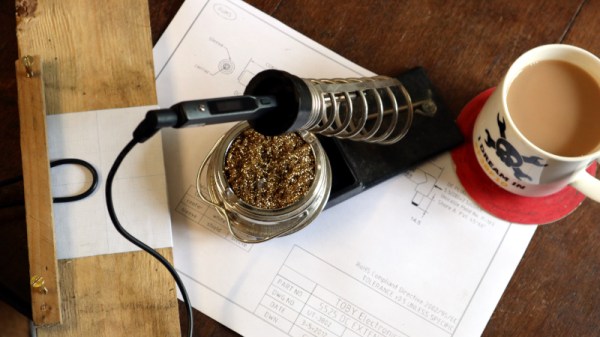 By now, I must have had my Miniware TS100 soldering iron for nearly three years. It redefined what could be expected from the decent end of the budget soldering iron spectrum when it came on the market, and it’s still the one to beat even after those years. Small, lightweight, powerful, and hackable, it has even spawned direct imitations.

If the TS100 has a fault, it comes not from the iron itself but from its cable. A high-grade iron will have an extra-flexible PVC or silicone cable, but the TS100 does not have a cable of its own. Instead it relies on whatever cable comes on its power supply, which is frequently a laptop unit built with portable computing rather than soldering in mind. So to use it is to be constantly battling against its noticable lack of flexibility, a minor worry but one that I find irksome. I determined to find a solution, making a DC extension cable more flexible than that on my power supply. END_OF_DOCUMENT_TOKEN_TO_BE_REPLACED

Network engineer [Mario Giambanco] recently purchased a cable to move his flash off camera. Unfortunately, it ended up way too short for his purposes. Instead of purchasing a slightly longer proprietary cable, he decided to employ what he had around him: a lot of cat5e cable and ethernet jacks. He cut the cable close to the center in case things didn’t work out and he’d need to repair it. His post on building the custom ethernet flash extension cable goes into heavy detail to make sure you get it right the first time. He’s tested it using both five and 50 foot pieces of cable with no apparent lag. I’ve lost count of the number of emails from people looking for these things, so here it is. The hardest part of [Mike’s] little hack is the soldering. The pins on those iPod connectors are just evil to solder. You’ll need the patience of a saint.

I’ve worked with these same connectors and I came up with an easier, if bulkier method of soldering those things in my iPod super dock How-To.