Since the COVID-19 pandemic started, we’ve seen several attempts to create homebrew ventilators designed to address the shortage of these lifesaving machines. Unfortunately, most hackers aren’t terribly experienced when it comes to designing practical medical equipment. So while many of the designs might have appeared functional on the workbench, there’s little chance they’d get used in any official capacity. 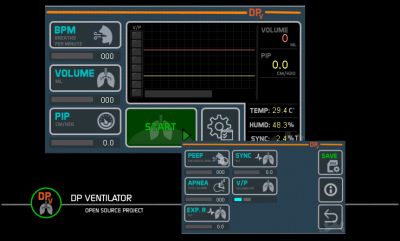 The open source DP Ventilator is still clearly the product of a couple plucky hackers, but we think it shows a level of design maturity that’s been missing in many of the earlier attempts. Made primarily with 3D printed components, this mechanical device is designed to operate a hand-held manual resuscitator; essentially standing in for a human operator. This makes the design far less complex than if it had to actually pump air itself, not to mention safer for the patient since the resuscitator (often referred to as an Ambu Bag) installed in it would be a sterile pre-packaged item.

In the video after the break, you can see just how much thought and effort has been put into the device’s touch screen interface. With a few quick taps the medical professional operating the DP Ventilator can dial in variables such as breathing rate, pressure, and volume to match the patient’s needs. While the Arduino Mega 2560 at the machine’s heart wouldn’t pass muster for any regulating body in charge of medical devices, we think with a few more tweaks, this design is getting close to something that might actually be able to save lives.