First, some background. Cerebral palsy is a permanent movement disorder that is usually identified in young children. It can cause a wide range of symptoms including stiff or weak muscles, coordination issues, or tremors, and symptoms can change over time. For such a wide array of effects, it can be difficult to design and implement effective tools that can cast a wide net over this community, which is what makes this build an interesting challenge.

There were two prototyping designs that the UCPLA team worked to build. The first was a gesture-based remote and the second was an adaptive universal remote. Both had the intended purpose of interacting more easily with the digital world. Most remotes on the market that are intended to help those with cerebral palsy aren’t easily adaptable to people with different sets of needs, have limited options, or are too expensive. As a proof-of-concept, the UCPLA team wanted the remotes to be able to easily interface with a Roku device, while making sure that any builds would be scalable and easily adapted to other digital technology in the future. As a principle they would keep in mind future scalability to other platforms, but taking this first step with a Roku was a reachable goal for the short timeframe.

The gesture-based remote went through a number of design iterations in order to test its feasibility in real-world situations. It uses a microcontroller and accelerometer set to measure motion and then it reports that motion to a computer in the same way that a mouse would. Since it effectively emulates a mouse, the first prototype tests involved using it to draw a picture in Paint, and then to navigate some mazes. There were a lot of lessons learned from these tests, and the team was able to use the experience to build a second prototype. This one included a large pushbutton at the top for increased functionality and also sports a larger battery that allows it to last for 6-8 hours between charges.

Building a gesture remote is one thing, but making sure that it’s scalable and easy to use for its intended audience is another thing all together. The team from UCPLA went to great lengths to make sure that the device could be integrated into a hub of devices all able to control a large number of applications, rather than a single-path use that only allows the device to control one application at a time. This allows other user interfaces to be used alongside the gesture remote, and for those devices to control a wide variety of applications simultaneously. It also opens up possibilities for multiple interfaces to control the same device more easily. For the hub they chose a Raspberry Pi running HassOS, a home assistant-focused operating system. 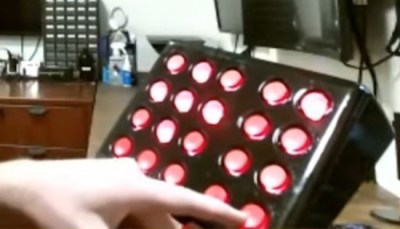 The second part of this build was the adaptive remote control, which will also be able to integrate with their hub system as well. This remote started out as a custom keyboard paired with a small screen which would act as a “cheat sheet” so that the user could see what functions the keys had at any particular moment. The idea was that the functions could change quickly, but the team eventually dropped the screen from the build in favor of a more direct function mapping on the remote after the first round of testing. The focus here is still on scalability, so making sure that the device can connect to many different smart devices and not just a Roku is an important design consideration for this build as well. Building off of the lessons from the first set of prototypes, the current iteration is a 20-button remote with large red buttons that are backlit and also include haptic feedback when pressed. The remote is linked to an IR blaster for easy control of a television without needing line-of-sight with the remote itself.

Adaptability is the Whole Ballgame

An important note is that there are a number of design choices in these builds that allow the devices to adapt to the users, rather than the users having to adapt to use the devices. This is important in this community since those with cerebral palsy have varying conditions from person to person. The gesture remote, for example, can be calibrated to work on any body part that has the greatest amount of control or range of motion, including the head, and both remotes can easily be adapted for use with any smart devices with Internet (or even IR or radio) connections.

While the design teams focused on integrating with a Roku for this build with its two-month time limit, there are a number of future expansions planned for these devices. Many improvements are planned for both remotes, including battery upgrades and software tweaks to push the devices to ten hours on a single charge, updates to button design including the addition of a panic button, and potentially adding a joystick for easier toggling of modes. They also plan to address some wearability issues as well, since plenty of people may not be comfortable wearing a device like the gesture remote for ten hours in a row.

UCPLA has done a great job with both of these remote controls, and as the largest cerebral palsy group in southern California they had an immense wealth of knowledge and experience available to help guide these builds in order to help the most people possible. While the two-month window is closed we are looking forward to further iterations of this hardware since it’s only possible to get better with such a solid foundation to work from.