I’ve got spare parts, and I cannot lie.

This week I’m sending out two care packages to friends and coworkers because I’ve got too many hackables on hand, and not enough time to hack them all. One is a funky keyboard, and the other is an FPGA dev board, but that’s not the point. The point is that the world is too interesting, and many of us have more projects piled up in the to-do box, with associated gear, than we’ll ever have time to complete. 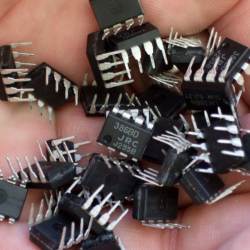 Back in the before-times, we would meet up, talk about our ongoing hacks, and invariably someone would say “oh you need an X, I’ve got half a box of them” and send you one. Or maybe you’d be the one with the extra widgets on hand. I know I’ve happily been in both positions.

Either way, it’s a win for the giver, who gets to take a widget off the widget pile, for the receiver, who doesn’t have to go to the widget store, and for the environment, which has to produce fewer widgets. (My apologies to the widget manufacturers and middlemen.)

This reminded me of Lenore Edman and Windell Oskay’s Great Internet Migratory Box Of Electronics Junk back in the late aughts. Trolling through the wiki was like a trip down memory lane. This box visited my old hackerspace, and then ended up with Bunnie Huang. Good times, good people, good hacker junk! And then there’s our own Brian Benchoff’s Travelling Hacker Box and spinoffs.

These are great and fun projects, but they all end up foundering in one respect: to make sense, the value of goods taken and received has to exceed the cost of the postage, and if you’re only interested in a few things in any given box, that’s a lot of dead weight adding to the shipping cost.

So I was trying to brainstorm a better solution. Some kind of centralized pinboard, where the “have too many h-bridge drivers” folks can hook up with the “need an h-bridge” people? Or is this ad-hoc social network that we already have working out well enough?

What do you think? How can we get the goods to those who want to work on them?