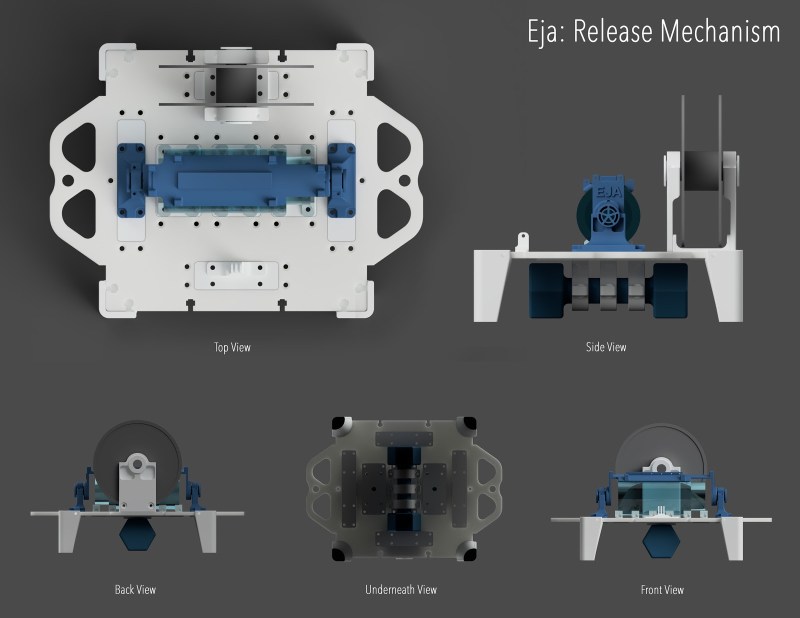 The first solution to this issue is a method by which fishermen can accurately locate their equipment. The team designed a ropeless trap marking system that attaches to a trap underwater, which would eliminate the need for a permanent fixed rope attached to a traditional buoy. The design includes a smart buoy that stays attached to the trap until its ready to be released, and then at the right moment, presumably when the trap is full, the buoy is released and is able to float up to the surface. While not truly “ropeless” since the buoy spools out a line as it makes its way to the surface, it does dramatically reduce the amount of time that the rope is actively dangling in the water where any passing animal can get snagged on it, and therefore also reduces the chances that the trap is lost as a result of a broken line.

The current prototype for the smart buoy is housed in a Nalgene bottle, which is made out of strong plastic capable of withstanding pressures to around 160 meters of depth. Inside the bottle is a set of electronics that make locating the buoy much easier. Each version contains a GPS module, a LoRa radio module, and an ESP32 to tie it all together, plus a battery and charging circuitry. One of the prototype boards additionally contains a cellular modem for additional tracking abilities.

Retrieving the Equipment in One Piece

Of course the buoy is not going to be able to communicate with much of anything while it’s sleeping with the fishes, so it also houses a set of magnetic wipers within its protective Nalgene case that keep it secured to the submerged trap. When it senses that it is time to deploy, a small motor moves the magnets which release it from its external housing mechanism. From there it can simply float to the surface while it deploys a small rope from a spool that’s also housed on the device. The device can communicate easily with its various included hardware to an on-boat gateway or to a properly-equipped cell phone.

Currently the prototype smart buoy deploys itself after a set amount of time has elapsed; in the video demonstration it is set to deploy every two minutes so that it can be tested quickly. In a real-world scenario though it could keep the timer feature and simply deploy at the end of the day, but the amount of electronics in the buoy allows for a number of other options for deploying itself that the team hopes to expand upon in the future. Other planned upgrades include using LEDs in the buoy to aid in location, and using cameras in the bottle to make determinations about the state of the trap. Some cameras were used in testing in Lake Ontario and the results showed that this will likely be a difficult problem to solve.

Perhaps the most important part of this project isn’t technology-based at all, but focuses on ensuring adoption of this technology by fishermen. These intelligent buoys have to be cost effective and simple to use. Since ghost gear costs them money as well, in terms of lost equipment, lost catch, and the long-term damage to the environment that is caused as a result, the team plans to work closely with the fishermen to make sure that all of their concerns about the equipment are addressed and their needs are met, both from a technology point-of-view but also from one of usability and economics.

There are certainly more questions to answer and more problems to solve, but this project has a promising start and will certainly help the declining situations in the oceans when it can be fully developed and implemented. We look forward to seeing Conservation X Labs’ future designs and solutions.

22 thoughts on “Untethered: Fishing Without Lines”