Whispers in the Noise

Ask a random amateur radio operator what’s on his or her mind at any given moment and chances are pretty good the answer will be, “How are the bands right now?” That’s shorthand for what the current state of the ionosphere is, which largely determines how well RF signals will bounce off the various layers of charged particles that wrap around the planet. These layers shift and move in diurnal cycles, and undergo longer-term cycles of strengthening and weakening that depend on the cycles of magnetic activity on the Sun.

Assessing the state of the ionosphere and finding out which bands have a path to which points on the globe used to be something that hams had to do by spinning the dial and listening for beacon stations. Beacons are stations that transmit a generally low-power signal from a fixed, know location on a regular schedule. If you can hear the beacon, chances are good that you’ve got a propagation path between you and the general area of the beacon on that frequency.

While beacons are useful, they have their limits. They depend on the kindness of strangers, who devote resources to running and maintaining the beacon station. Beacons are also subject to occasional maintenance outages, so not hearing a beacon you expect does not necessarily mean that you don’t have a path between two points. But perhaps the most limiting aspect of traditional beacons is that they operate on a pull model — you have to sit down at your radio and intentionally tune into the beacon’s frequency and decode what you hear — beacons almost always use continuous wave (CW) mode with Morse code. Add to that the fact that whatever you learn about the propagation paths available to you stays pretty much within your shack, and beacons have limited utility.

With those limitations in mind, Joe Taylor (K1JT) began working on a digital mode in 2008 specifically for exploring propagation paths. The protocol was dubbed WSPR, which of course everyone pronounces as “whisper,” which given its capabilities is an apt name indeed. WSPR is a digital mode that employs special digital signal processing algorithms to decode signals with a signal-to-noise ratio (SNR) of -28 dBm in a bandwidth of 2,500 Hz.

When transmitting, WSPR sends a compressed 50-bit message that encodes the station’s callsign, the grid location, and the transmitter power. The message is modulated using frequency-shift keying at a very low bit rate — less than 1.5 baud. This means an entire message with error correction takes almost two full minutes to send. Transmissions are synchronized by the WSPR software to begin one second into each even-numbered minute, making accurate time synchronization essential.

As cool as the WSPR protocol is, the magic of WSPR comes from the “R” part of its name: reporting. This is where WSPR closes the loop that traditional beacons leave open, since WSPR client software can be configured to log any WSPR signals received and decoded by a station to a central database. WSPRnet.org is the place where all the reports go; the site contains a searchable database of all “spots” reported as well as a map that shows current contacts by many, many stations.

The map on WSPRnet is admittedly a bit janky — it’s based on Google Maps, and an error dialog pops up every time you load a new view. There are other visualizations, though, but even with the issues, WSPRnet’s map is a great way to see what propagation paths may be available to you at the current time.

For example, I took a quick peek at the 20-m band just now and found that from my area, I’ve got solid paths to pretty much all of North America. More importantly, I can see that I have no paths into Europe or Asia, and very little to the south into Central and South America. But, by looking at what’s going on with paths on the east coast of the US, where the sun is currently setting and which are actively reaching several stations in and just offshore of Antarctica, I might have a path to the bottom of the planet coming up as the sun sets over me. 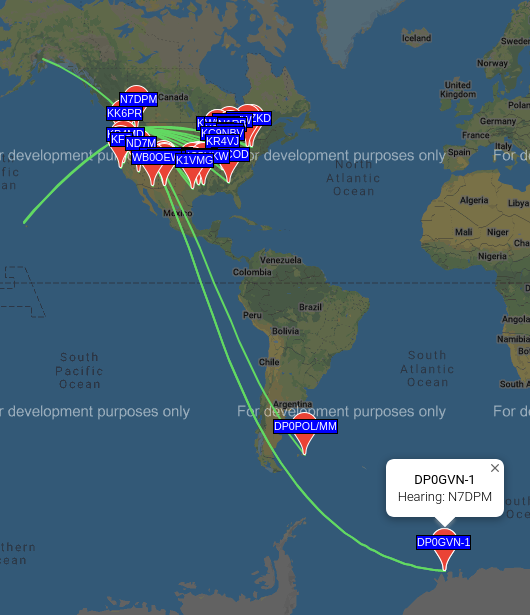 As I mentioned in my first weak-signals article, I’ve currently got WSJT-X running on a Raspberry Pi 4 that I have dedicated to ham radio use. WSJT-X has a built-in WSPR mode, which makes it easy to switch back and forth between exploring possible propagation paths with WSPR and exploiting that information to make actual QSOs using FT8 or one of the other supported modes.

The beauty of using WSJT-X for WSPR work is that it’s basically completely automated. Depending on how you set it up, you can either be a dedicated WSPR receiving and reporting station, or you can choose to also transmit.

When I’m going to be in the shack / office, which is almost always, I set up WSJT-X to transmit on WSPR with a 20% duty cycle — that is, one out of every five two-minute blocks will be dedicated to transmitting. That way, I can do my part contributing to the WSPR map — there generally aren’t many WSPR beacons operating in my part of North Idaho, so I figure this is my way of pitching in. Plus, I get the occasional bonus of nabbing a cool contact, like the aforementioned hit on DP0GVN-1, a German research vessel parked off the coast of Antarctica that I reached on the 30-m band using just five watts.

Sweden, By Way of Alaska

As cool as it is to know you’ve made a solid contact over a path of about 10,000 km on less power than it takes to run an LED light bulb, there’s also a lot to be said for the unusual stations you receive when you leave your WSPR station running. Case in point: the other day I glanced up at WSJT-X and noticed a strange callsign, SA6BSS. After a while of looking at callsigns you get to know which general areas they come from, and I suspected this was a “rare DX” coming from Europe, which is really hard for me to hit with my antenna from the inland Pacific Northwest. A quick lookup on QRZ.com confirmed that SA6BSS is a ham named Mikael Dagman, based in southern Sweden — cool!

I quickly spun up the WSPRnet map and was surprised to see that Mikael’s station was reporting its position as coming from Alaska rather than Sweden. I zoomed in the map a little and found that the signal was coming from a grid hundreds of kilometers south of Unalaska Island in the Aleutians. What in the world would a Swedish ham be doing in the North Pacific in February?

I shot Mikael a quick email about the contact, and he confirmed that I had indeed received a correct position report from his WSPR station, currently floating around the world on a party balloon! Since he released the balloon on Feb 23, it has traveled at around 11,000 meters altitude from Sweden to the Middle East, across Asia, and over the Pacific to just off the coast of Oregon. There it took a hook and headed back out to sea; as I write this it’s heading roughly in the direction of Hawaii.

Mikael was kind enough to include a little information on the WSPR transmitter he included on his balloon, which is completely solar-powered and weighs in at only 2.6 grams. The spareness of his design is almost comical — it’s just a GPS module, an ATMega328, and an Si5351 for the transmitter. It’s a perfect example of what can be done on a budget, which is right in line with “The $50 Ham” concept. So naturally, building a lightweight, inexpensive WSPR beacon will be the basis of the next installment in this series.