But among these miserable creatures, there are some absolute gems. Parts that continually call out to be used. Bits that would fire even Thomas Edison’s imagination. Unforgetable junk.
Mostly, it’s their physicality that calls out to me. I have a stack of old 5″ hard drive platters, gutted, and converted into essentially a rotary encoder. For years, I used it as a USB scroll wheel on my desk, but most recently it has made reappearances in other goofy projects — a music box for my son that played notes in a row depending on how fast you spun it, and most recently a jog wheel for a one-meter linear motion project that hasn’t really found its full expression yet, but might become a camera slider. Anyway, when I needed a nice physical rotary encoder knob, the hard drive was just sitting there waiting to be used.

An old rotary dial phone also falls in this category. It ends in a barrel jack instead of an RJ45, so it’s easy to incorporate into other projects. Previously, it’s been the interface for a USB dial-a-password device, but it got supplanted by software that takes up less desk space. I’m sure I’ll come up with something else for it to do. 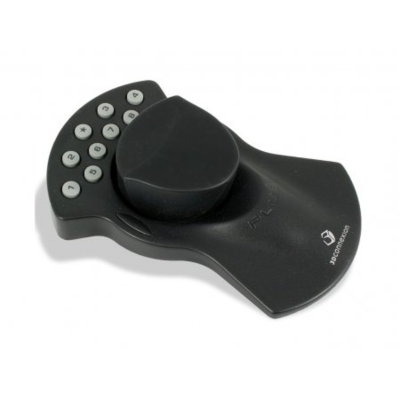 The undisputed kings of my unforgettable junk, that I haul out year after year, are two Magellan Space Mice. They are the old serial port kind, speaking 9600 baud to any microcontroller, and are easy to interface with. They put out six axes of control plus a few buttons, and they’re frankly a technological marvel. These have been used for remote control cars, and even once for a ride-on vehicle, but only briefly because it was too dangerous. I’ve never managed to use more than four axes at once, but that implicit challenge is part of their charm.

In the strangest turn of events, the maintainer of the Linux Spacenav driver project, John Tsiombikas, pulled the serial Space Mice into the code base in December. So now I’m using both of them for their intended purpose — manipulation of 3D designs in CAD/CAM software — one in the office and one in the workshop. Not a hack!

It was great to have the Space Mice in the junk box; they were truly inspirational. On one hand, being promoted into everyday use is the ultimate goal, I guess, but it still leaves a hole in my heart. I’ll be keeping my eyes out for a couple more, I think. The junk box hungers.