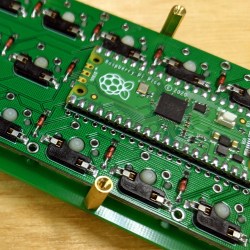 For some applications, smaller is better and that is precisely the thinking behind a diminutive keyboard like the PiPi Gherkin, which is designed to use the Raspberry Pi Pico as its controller. This keyboard may have only 30 keys in total, but they are full-sized for comfort and don’t let the scant layout mislead you. It has more functionality than it would seem to at first glance; the entire bottom row acts as dual function tap/hold keys, allowing the keyboard to shift layers on the fly.

This keyboard definitely has a a thoughtful layout, and we’re not just talking about the tap/shift functionality. We especially like the way the Pi Pico is tucked neatly underneath the main PCB, taking up very little room while exposing its USB connector between two standoffs for easy access without requiring an adapter, or wiring a separate plug.

If the Gherkin sounds familiar, we’ve seen it before as part of this lunchbox cyberdeck build, where the small size allowed it to take up impressively little room. The shifting might take a little getting used to, but it’s a clean design that uses full sized keys, so when it comes to small keyboards one could certainly do worse.