West modeled the Earth’s exact shape based on data from the GEOS satellite. She later became the project manager for SEASAT, which used radar to measure the ocean surface. Her interest led her to work with the IBM 7030 computer to refine models of the Earth known as the geoid. This takes into account things like tidal forces and gravity to compute the true shape of the Earth, rather than simply assuming that it’s a perfect sphere. An accurate geoid is an important part of today’s GPS and similar navigations systems.

Her family did not have the money to send West to school, so she worked hard to earn a full scholarship. The top two graduating high school students got a full ride and through discipline and her intellect, graduated valedictorian in 1948.

She was excellent in all her subjects but elected to major in math. After a brief tenure teaching, she went back for a Master’s degree. Even with an advanced degree, though, teaching didn’t pay very well. Despite her trepidation in moving to Virginia during the 1960s, the Navy job offered her a better wage and she stayed in that job until retirement over four decades later. 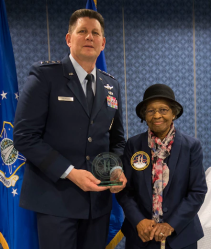 West received several awards during her time at work. In addition, she was inducted into the Air Force Hall of Fame in 2018. The Navy even produced a short video that you can see below.

Of course, many people worked on GPS — known as NAVSTAR at its inception. It wasn’t even the first system of its kind. That honor probably goes to the 1960 Transit project. But all of these systems needed accurate mathematical models of the Earth, and West was a key part of the team that made that happen. Making accurate clocks, keeping them in sync, and shrinking all the components down with a low cost have their own stories and heroes, but for the math, we can thank Gladys West.

We like knowing the stories behind the tech we use every day. We think Gladys West is even more inspiring because of her humble beginnings and the obvious determination and intellect she had to carry her so far. Gladys got her PhD after she retired, but we understand she still prefers to use paper maps.

Want to know more about GPS? We can help. Just want to use it? We’ve come a long way from $3,000 handheld GPS units.