To say that 2020 was a transformative year would be something of an understatement. The COVID-19 pandemic completely changed the way we worked, learned, and lived. Despite all those jokes about how much time people spend on their devices rather than interacting face-to-face with other humans, it turns out that when you can’t get more than a few people together in the same room, it throws our entire society into disarray.

Our community had to rethink how we congregated, and major events like HOPE, DEF CON, and even our own Hackaday Supercon, had to be quickly converted into virtual events that tried with varying degrees of success to capture the experience of hundreds or thousands of hackers meeting up in real life. While few would argue that a virtual hacker convention can ever truly replace a physical one, we learned there are undeniable benefits to embracing the advantages offered by cyberspace. If nothing else, the virtual hacker meetups of 2020 saw a far larger and more diverse array of attendees and presenters than ever before.

As we begin seeing the first rays of light at the end of the long, dark, tunnel we’ve been stuck in, it’s clear that some of the changes that COVID-19 forced on our community are here to stay. As eager as we all are to get back to the epic hackfests of old, nobody wants to close the door on all those who would be unable to attend physically now that they’ve gotten to peek behind the curtain.

With this in mind, this year’s DEF CON is being presented in both physical and virtual forms simultaneously. If you made to Las Vegas, great. If not, you can follow along through chat rooms and video streams from the comfort of your own home. Following the theme, the DC29 badge is not only a practical tool for virtual attendees, but an electronic puzzle for those who are able to bring a few of them together physically. Let’s take a closer look at this socially distanced badge and the tech that went into it.

On its own, the DC29 badge is a four-key RGB mechanical macro pad that connects to your computer over USB-C. Out of the box the keys are configured to work with Discord, allowing you to do things like mute your microphone and fire off some appreciative emotes. Along the right side of the device are three touch pads which are configured to work as a volume slider, nicely completing the array of available media controls. 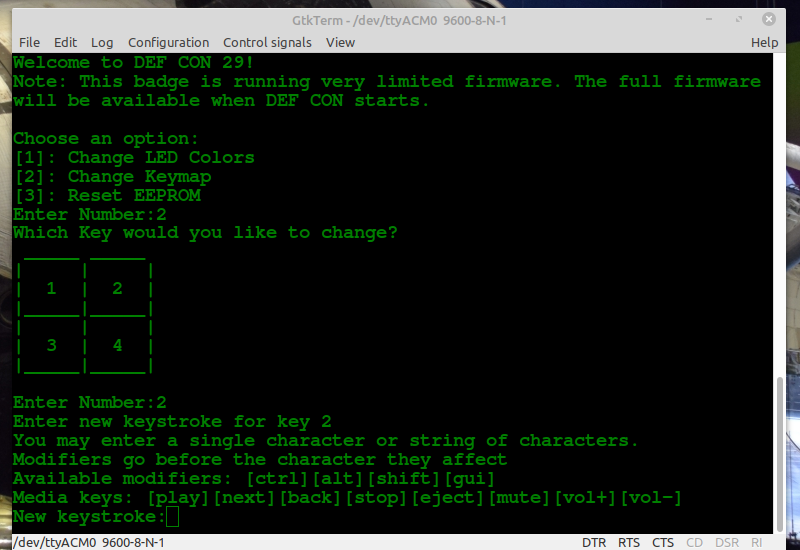 The badge enumerates as a serial device, and if you connect to it with a terminal emulator, you’ll be presented with a simple user interface for re-configuring not only the function of each of the four keys, but their individual RGB color values. The touch pads on the side can’t currently be configured through this UI, but as you’re notified when first connecting, this is only a minimal firmware implementation; a more complete version is scheduled to be released during DC29.

Speaking of which, firmware updates are installed using a method that will be familiar to anyone who’s worked with MicroPython. Holding the bottom right key while plugging in the badge will cause it to show up as a USB Mass Storage device that contains the firmware in UF2 format, providing a user-friendly and cross-platform way of getting new code running on the badge. The virtual drive also contains an HTML file, but at least for now, it simply points you to the DEF CON site.

Mechanical keyboard aficionados will be pleased to learn that the badge’s four Gateron Blues are installed in hot-swappable sockets, should you want to customize the board’s tactility with a new set of switches. Each key is topped with a custom DEF CON relegendable keycap, allowing you to insert your own printed artwork. The caps appear to have been resin 3D printed, and given the fairly obvious variability in color, clarity, and quality that can be seen even with a sample size of only four, it seems their production was likely the result of a breakneck collaborative effort.

Between the configurable software, hot-swappable switches, and customizable keycaps, the DC29 badge is a surprisingly robust little macro pad. It seems safe to say that, long after this year’s con is wrapped, many people will still be using this badge on a daily basis.

The two layers of the badge are held together with four plastic pegs, and pulling them apart uncovers a surprisingly barren interior. In fact the only component really worth mentioning is the Atmel ATSAMD21G16B, a 32-bit ARM Cortex-M0+ microcontroller. This 48 MHz chip includes 64 KB of flash, 8 KB of SRAM, a capacitive Peripheral Touch Controller (PTC), and an integrated USB controller.

Outside of the MCU, there’s just a buzzer, what’s presumably a voltage regulator, and some passives. There are no obvious sensors or radios, but the array of physical connectors on every side of the badge does hint that there are still a few tricks to be revealed.

The DC29 badge is eminently useful on its own, in fact, it arguably ranks up there with the most practical event badges ever conceived. But it’s also designed to work in conjunction with other badges, as the edge connectors and silkscreen messages hint. Multiple badges can either snap together or be interlinked via USB cables, and thanks to the onboard CR2032 battery, they don’t need to be tethered to the computer for power.

As for what they do when they’re connected…well, we’re going to have to wait a bit before we find out. For one thing, it’s not immediately clear that the current firmware even supports linking the badges together. While hardly an exhaustive investigation, searching the firmware for ASCII strings doesn’t uncover any messages that would pertain to any functionality beyond acting as a macro pad.

Those attending DEF CON physically may find they need to perform a firmware update before their badges will actually do anything interesting when connected to each other, but by all means, give it a shot and let us know.

A Badge For a New Era

The rise of Badgelife has always been fueled by the hacker’s desire to show off their collection of glittering artisanal electronics. But what happens when there’s no packed convention hall for you to wander around in? That neck full of PCB bling doesn’t have quite the same appeal when you’re attending a con from your bedroom. How do you make a badge compelling for an individual who might never get within a hundred kilometers of another holder?

Creating a device that combined the traditional form and function of DEF CON badges with the socially distanced nature of a virtual convention was no easy task, but the DC29 badge certainly managed to pull it off. As a single unit it’s a useful and customizable gadget, and in large quantities, it doubles as a piece in an interactive puzzle. As hacker conventions continue to blur the line between physical and virtual attendance over the coming years, this design will inevitably be the yardstick by which future badges are measured.

Whether or not the majority of DC29 badges ever get the chance to connect with another of its kind, one thing is for sure: each one will be a prized possession by any hacker that was able to get their hands on one.