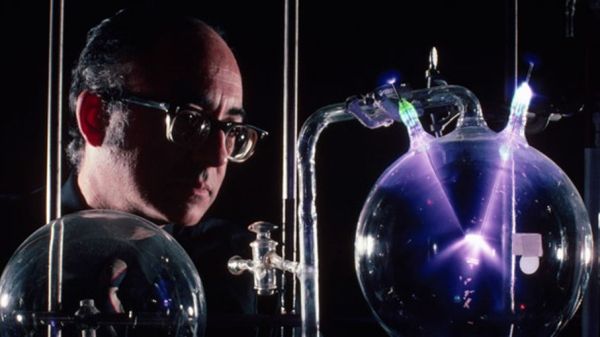 Science is built on reproducibility; if someone else can replicate your results, chances are pretty good that you’re looking at the truth. And there’s no statute of limitations on reproducibility; even experiments from 70 years ago are fair game for a fresh look. A great example is this recent reboot of the 1952 Miller-Urey “primordial soup” experiment which ended up with some fascinating results.

At the heart of the Miller-Urey experiment was a classic chicken-and-the-egg paradox: complex organic molecules like amino acids and nucleic acids are the necessary building blocks of life, but how did they arise on Earth before there was life? To answer that, Stanley Miller, who in 1952 was a graduate student of Harold Urey,  devised an experiment to see if complex molecules could be formed from simpler substances under conditions assumed to have been present early in the planet’s life. Miller assembled a complicated glass apparatus, filled it with water vapor and gasses such as ammonia, hydrogen, and methane, and zapped it with an electric arc to simulate lightning. He found that a rich broth of amino acids accumulated in the reaction vessel; when analyzed, the sludge was found to contain five of the 20 amino acids.

The Miller-Urey experiment has been repeated over and over again with similar results, but a recent reboot took a different tack and looked at how the laboratory apparatus itself may have influenced the results. Joaquin Criado-Reyes and colleagues found that when run in a Teflon flask, the experiment produced far fewer organic compounds. Interestingly, adding chips of borosilicate glass to the Teflon reaction chamber restored the richness of the resulting broth, suggesting that the silicates in the glassware may have played a catalytic role in creating the organic soup. They also hypothesize that the highly alkaline reaction conditions could create microscopic pits in the walls of the glassware, which would serve as reaction centers to speed up the formation of organics.

This is a great example of a finding that seems to knock a hole in a theory but actually ends up supporting it. On the face of it, one could argue that Miller and Urey were wrong since they only produced organics thanks to contamination from their glassware. And it appears to be true that silicates are necessary for the abiotic generation of organic molecules. But if there was one thing that the early Earth was rich in, it was silicates, in the form of clay, silt, sand, rocks, and dust. So this experiment lends support to the abiotic origin of organic molecules on Earth, and perhaps on other rocky worlds as well.