There was a time, not quite so long ago, when a computer was a beige box that sat on your desk. Before that, computers were big enough to double as desks, and even farther back, they took up a whole room. Today? Well today it’s complicated. Single-board computers (SBCs) like the Raspberry Pi put a full desktop experience in the palm of your hand, for a price that would have been unfathomable before the smartphone revolution increased demand for high-performance ARM chips.

But compared to the tiny open hardware Linux SBC that lives inside the WiFiWart, even the Raspberry Pi looks massive. Developed by [Walker] as a penetration testing tool, the custom computer is housed in an enclosure designed to make it look like a traditional (if a bit large) USB phone charger. In fact, it doesn’t just look like a USB charger, it actually is one. The internal power supply is not only capable of converting AC into the various DC voltages required to run the miniature Linux box, but also features a USB port where you can plug in your phone to charge it. 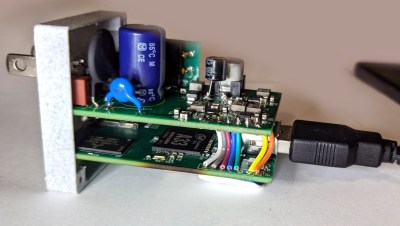 For the infosec folks in the audience, the applications for the WiFiWart are obvious. Just plug this thing in somewhere inconspicuous, and you’ve got a foot in the door. The dual WiFi interfaces mean you can connect to a target network on one card and use the second to spin up a fake access point or exfiltrate data. Plus with a quad-core Cortex-A7 ARM processor running at 1.2 GHz and a healthy 1 GB of DDR3, you’ll have enough power to run many security tools locally.

But of course, nothing keeps you from using the WiFiWart for non-security purposes. That’s what has us particularly excited, as you can never have enough open hardware Linux boards. Especially ones this tiny. Removed from its wall charger disguise, the brains of the WiFiWart could be used for all kinds of projects. Plus, not only is the final design open source, but [Walker] made sure to only use free and open source tools to create it. Keeping his entire workflow open means it will be easier for the community to utilize and improve upon his initial design, which in the end, is the whole idea behind the open hardware movement and efforts such as the Hackaday Prize.