One of the most recognizable instruments in both jug band and American folk music has got to be the washtub bass. Also known as gutbuckets, these instruments tend to use an old broom for a neck and usually have a single string. 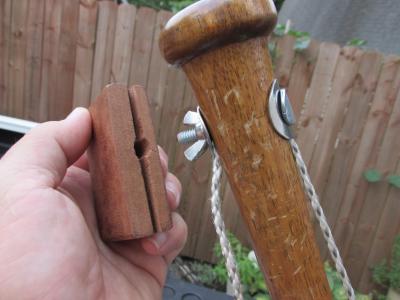 We would argue that the design of [goaly]’s single-string double gutbucket owes something to the double bass of the violin family as well, with its figure eight shape. On top of those tubs is a plywood soundboard, which is screwed into a series of wood blocks around the lip of the tubs.

For the combination neck and fretboard, [goaly] called up a vintage Louisville Slugger, which is way more interesting than some old broom handle. [goaly] extended the backbone through the body with scrap lengths of 2″x2″, and this spine runs through both tubs and acts as a peg on the bottom. In lieu of a tailpiece, the string is tied to a board that the player secures with their foot.

Although [goaly] experimented with steel cable, clothesline rope, nylon rope, and paracord first, the string is made from weed whacker trimmer line. At the top, the string is attached through the neck — it’s held down with a couple of bent fender washers and pulled taut with a wingnut. We love that [goaly] even fashioned a wooden tool to make it easy to turn the wingnut. And we also love the DIY bridge, which looks like a little person.

There are a couple of ways to make sounds with this thing. Fretting and plucking work, of course, but so does bending the whole thing backward to change the pitch. For a good time, do both. We think it sounds nice and thump-y, and it even makes great percussive sounds on the front and back. Check it out in action after the break.

Don’t have a washtub? A wheelbarrow works too, and it comes with its own stand.

2 thoughts on “Louisville Slugger Puts This Bass On Base”