No matter how many syllables you use to say it, aluminum is one of the most useful industrial metals we have. Lightweight, strong, easily alloyed, highly conductive, and easy to machine, cast, and extrude, aluminum has found its way into virtually every industrial process and commercial product imaginable.

Modern life would be impossible without aluminum, and yet the silver metal has been in widespread use only for about the last 100 years. There was a time not all that long ago that aluminum dinnerware was a status symbol, and it was once literally worth more than its weight in gold. The reason behind its one-time rarity lies in the effort needed to extract the abundant element from the rocks that carry it, as well as the energy to do so. The forces that locked aluminum away from human use until recently have been overcome, and the chemistry and engineering needed to do that are worth looking into in our next installment of “Mining and Refining.”

Aluminum is the single most abundant metallic element in the Earth’s crust. But for something that makes up 8% on average of the ground beneath your feet, it’s extremely hard to come by in its elemental form. There are no outcroppings or veins of metallic aluminum to mine; aluminum is almost always found in its various oxide forms, and needs to be chemically liberated to be of any use as an industrial metal.

While aluminum-bearing rocks are widely distributed, there are only a few economically significant deposits of the primary ore of aluminum: bauxite. The exact content of bauxite varies, but it is generally composed of aluminum oxide minerals in association with aluminum hydroxides, clays, quartz, and iron-bearing minerals. Some of the largest and richest deposits of bauxite are located in the tropics, where alternating periods of high temperatures and abundant rainfall are followed by long dry periods.

The chemical weathering that these conditions favor is really the first step in aluminum processing — it breaks the bauxite, which is already a very soft rock, into bite-sized pieces that are easily scooped up. Most bauxite is mined using open-cast mining techniques. The current world leader in bauxite production is Australia, which produces about a quarter of world production. China comes in second, with the West African nation of Guinea coming in third. There are also large deposits of bauxite in Brazil and the Caribbean, mainly in Jamaica.

Because there are only a few places in the world where bauxite is mined, the ore is frequently shipped long distances for further processing. This can end up being a dangerous proposition when the ore is shipped across the ocean because of liquefaction and dynamic separation. Bauxite typically contains a lot of clay, and when exposed to rainwater it can form a quicksand-like suspension that behaves like a liquid. When loaded into the holds of a bulk carrier ship, overly wet bauxite can slosh around and, when coupled with the tendency for the water in the slurry to migrate upward, change the center of gravity of the ship with disastrous results.

So Close, Yet So Far

Raw bauxite ore must be chemically treated to remove the impurities and make it ready for smelting the aluminum it contains. The Bayer process is almost always used to accomplish this, and consists of cooking large batches of crushed bauxite in a pressure vessel with a solution of caustic soda, or sodium hydroxide. At 150° to 200° C, the aluminum oxides and hydroxides, which are normally insoluble in water, react with the sodium in the sodium hydroxide to form sodium aluminate:

This solubilizes the aluminum in the bauxite but not the impurities, which are mainly iron oxides. The insoluble materials, along with excess sodium hydroxide, are filtered off into a waste product called “red mud.” Vast amounts of red mud are produced at bauxite processing plants and stored in lagoons, often formed by flooding played-out bauxite pits when the ore is processed close to where it was mined. The oxides in red mud have economic value, and can be recovered for use in industrial processes that include the recovery of trace amounts of rare earth elements that can be present in the tailings. Red mud can also lead to disaster if it is not properly handled.

The final step in bauxite processing involves precipitating the aluminum in the filtrate and purifying it. This is accomplished by seeding the solution containing the sodium aluminate with highly purified crystals of aluminum hydroxide. This causes aluminum hydroxide crystals to form and drop out of the supersaturated solution:

The next step of processing is to actually smelt the elemental aluminum from the alumina. The process used to accomplish this is the Hall-Héroult process, named after American chemist Charles Martin Hall and French scientist and inventor Paul Héroult, who independently and nearly simultaneously invented the process in 1886. The process basically seeks to undo the oxidative processes of nature that originally locked elemental aluminum into its oxides to form bauxite. It does so electrolytically, and therefore requires access to massive amounts of cheap electricity to be economically viable; this is why aluminum smelters are often located close to hydroelectric dams. 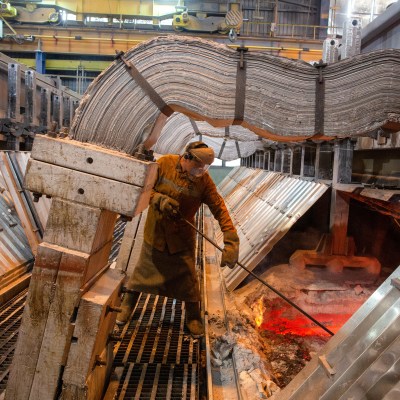 To electrolyze the alumina powder, it first has to be liquefied. Simply melting it isn’t feasible, since it has an outrageously high melting point (2,072° C). The key to the Hall-Héroult process was the discovery of cryolite, a  salt of sodium, aluminum, and fluorine. Cryolite lowers the melting point of alumina to about 900° C, making electrolysis possible. Cryolite occurs naturally but is very rare, being found in only a few places on Earth. Almost all of the cryolite used for aluminum smelting is now produced synthetically.

On an industrial scale, the Hall-Héroult process is carried out at nearly ludicrous levels, with smelting plants so large they can be seen from space. Each steel reaction cell, called a pot, is lined with ceramic and has a graphite cathode at the bottom. The pot is charged with alumina powder and cryolite, and a massive composite anode is lowered into the mix. The anode is made mostly of fused coke with a copper or steel frame to conduct the current needed — hundreds of thousands of amps — to electrolyze the solution.

The electrolysis reaction causes metallic aluminum to form at the anode of each cell. The molten metal is denser than the electrolyte, so droplets sink to the bottom of the pot where they accumulate on the cathode. Pots are run continually, and it takes anywhere from one to three days for enough molten aluminum to accumulate. The liquid metal is tapped off by a siphon, the consumable anodes are swapped out as needed, and another charge is added to the pot.

The aluminum that comes off the pot is about 99% pure aluminum and is generally cast into ingots or bars for further processing. Aluminum at this purity level is mostly used for food containers or as electrical conductors, such as overhead power lines. If higher purity metal is desired, another electrolytic process known as the Hoopes process can bring the purity up to “four-nines” level (99.99%). All metals from 99% pure and up are known as “1000-series” aluminum.

Read more from this series:
Mining and Refining

29 thoughts on “Mining And Refining: From Red Dirt To Aluminum”