Sometimes the best inspiration is limitation. The 555 timer does “one thing” — compares a voltage to a couple thresholds and outputs a signal accordingly. It’s two comparators, a voltage ladder, and a flip-flop. And yet, it’s the most sold single chip of all time, celebrating its 50th birthday this year! So when Hackaday runs a 555 Timer Contest, hackers of all stripes come out with their best work to show their love for the Little DIP That Could. 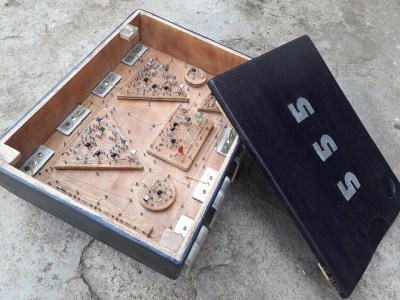 Far and away the favorite entry was the Giant 555 Timer by [Rudraksha Vegad]. Every one of our judges rated it in the top five, and it took top honors twice. On its face, this is a simple “giant 555 in a box” build, but have a look under the hood. Each sub-module that makes up the 555 — comparators, flip-flop, and amplifier — are made from salvaged discrete parts in actual breadboard fashion, soldered to brass nails hammered into wood. As an end product, it’s a nice piece of woodworking, but as a process of creation, it’s a masterwork in understanding the 555 at its deepest level. We should all make one!

The Menorah555 is a simple design with some very nice tricks up its sleeve. Perhaps the cutest of which is pulling the central candle out and lighting the others with it — a trick that involves a supercapacitor and reed switches. Each of the candle lighting circuits, however, use a 555 timer both for its intended purpose of providing a timed power-on reset pulse, and another 555 is used as a simple flip-flop. It’s a slick design, and a great user interaction.

The Cyclotone Mechanical Punk Console Sequencer is a rotating tower of circuit sculpture and noisemakers. This one looks great, is amazingly well documented in the video series, and uses a billion clever little tricks along the way. The 555’s role? Each of the four levels is the classic Atari Punk Console circuit.

All three of these projects win a $150 shopping spree at Digi-Key. That’s a lot of timers!

You had one task — blink an LED with the 555. [Sami] made a PCB of an Audi e-tron for a departing colleague. What can we say? The LEDs blink with 555s, and the board looks snazzy.

Turns out that you can make a 4 MHz radio transmitter out of just two LMC555s. (They’re the fast ones.) Indeed, the circuit’s only semiconductors are the two 555s. One creates the carrier frequency, and the other simply inverts the signal. The two of them in tandem form a push-pull amplifier, for “maximum” power. 4 MHz with a 555 oscillator isn’t bad!

One of the strangest hacks, hands-down, is the Accordeonator. It’s made out of a CD drive, and pulling the CD sled in and out turns the drive motor, which is used as a generator to power the whole circuit. Seven buttons connect up timing resistors to the 555, which makes the music. Very cool!

If there are times when you should have, there must also be times when you shouldn’t, right? For instance, you probably shouldn’t use 555s as stepper motor drivers, or as counters, in this leaping-frog LED sculpture. A 555 definitely doesn’t have the precise temporal resolution necessary to glitch an STM8’s read-only protection bit, right? Certainly you wouldn’t bit-bang the DMX512 serial protocol or make a serial ADC with a 555? And if you shouldn’t use a 555, does it count if you turn an ATTiny85 into a drop-in replacement?

This category didn’t disappoint, and we’re not surprised. Tell Hackaday readers what they can’t do, and they’ll do it!

Finally, our judges really liked CS 555, a wholly circuit-sculpture discrete 555, and the Spirit of the ’62 Rambler Nixie Clock which animates an old car’s dash as if driven by a ghostly force. Of course it’s a 555.

We honestly didn’t know that we needed an honorable mention category for making your own 20-pin 555-timer based silicon, but apparently we did. [Adrian Freed] has a pair of new 555-based IC designs that include other features on-chip: one with eight output buffers and a counter, and another with the guts of a linear-feedback shift register inside. His demo example? Blinking a bunch of LEDs, naturally. We’d love to see more detail about this project in the future.

Kudos to all entrants in the contest! You should really take some time to browse all of the entries, and not just those that resonated most with us. Because who knows, you might just find yourself stranded on a desert island, with only a crate of 555s on hand, and need to reconstruct modern society.

Thanks again to our sponsor Digi-Key for the prizes and the support!

25 thoughts on “Congratulations Winners Of The 555 Timer Contest!”