[Vaibhav Chhabra], the co-founder of Maker’s Asylum hackerspace in Mumbai, India, starts his Remoticon talk by telling a short story about how the hackerspace rose to its current status. Born out of frustration with a collapsed office ceiling, having gone through eight years of moving and reorganizations, it accumulated a loyal participant base – not unusual with hackerspaces that are managed well. This setting provided a perfect breeding ground for the M19 effort when COVID-19 reached India, mixing “what can we do” and “what should we do” inquiries into a perfect storm and starting the 49 day work session that swiftly outgrew the hackerspace, both physically and organizationally.

When the very first two weeks of the Infinite Two Week Quarantine Of 2020 were announced in India, a group of people decided to wait it out at the hackerspace instead of confining themselves to their homes. As various aspects of our society started crashing after the direct impact of COVID-19, news came through – that of a personal protective equipment shortage, especially important for frontline workers. Countries generally were not prepared when it came to PPE, and India was no different. Thus, folks in Maker’s Asylum stepped up, finding themselves in a perfect position to manufacture protective equipment when nobody else was prepared to help. 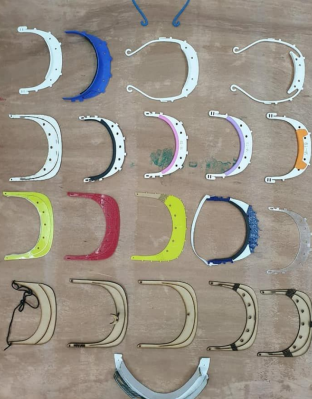 We’ve seen collective projects like these over the years – this one is magnificent in its thoughtfulness at scale. All of that is here for us to learn from – for instance, nuances of manufacturability optimisations in context of diverse variety of hackerspace infrastructure. An often-forgotten requirement for any project wishing to be successful is expanded upon – keeping the end users, healthcare specialists, in a tight iterative design loop. The sheer amount of this effort, coupled with media coverage, didn’t go unnoticed by other hackerspaces, which is where the challenge of sharing knowledge rose up, and was swiftly dealt with. End result? One million faceshields produced across India’s hackerspaces and other lasercutter-equipped places, in only a bit longer than a month and a half’s time.

After the demand for face shields started to finally get fulfilled, the new capabilities and strengths of the hackerspace consortium were waiting for the next goal to be unlocked – at least, those that didn’t need to be diverted to quality assurance and keeping the effort running. The experiences and frameworks developed during are now a vital part of a research case study and QA/QC principle formation effort, both led and funded by University of Cambridge. In turn, the maker resources available were then directed towards designing and manufacturing oxygen concentrators, as well as repairing the ones that were just waiting to be put into working order.

If you were ever looking for a tale of a myriad hackerspaces collaborating on a social project, this is it – and there’s plenty to learn for anyone wishing to inspire other hackers to conquer large social problems. This talk covers about every part of the process that you would like to learn from, wrapped in an exciting story you could make a documentary on. The effort lives on, and we will certainly see its principles in action whenever it is that the next storm hits us.