Have you ever played with Rose’s metal? It’s a fusible alloy of bismuth, lead, and tin with a low melting point of around 100 °C. Historically, it’s been used as a solder for cast iron railings and things, and as a malleable pipe filler material to prevent crimping while a pipe is bent. 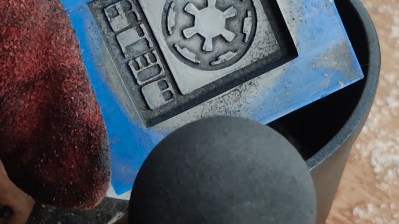 [Ben Healey] has been playing around with Rose’s metal and some PETG printed molds, making everything from Star Wars Imperial credits to chess pieces to leather stamping tools. In the video after the break, [Ben] takes us through the process, beginning with mold-making from STLs — something he picked up from another YouTuber.

He recommends adding registration marks to multi-part molds in order to keep everything lined up, and adding a small recess in the seam for easy separation with a flat-head screwdriver. So far, the molds have held up to multiple pours, though [Ben] did print them rather thick and is glad he did.

As far as making liquid metal, [Ben] used a cast iron pot with a convenient pour spout, and a blowtorch. He added graphite powder to the molds in an effort to make them give up the goods more easily. To finish the pieces, [Ben] cut the flashing with tin snips and used sandpaper and a Dremel to smooth the edges. Copper plating didn’t work out, but [Ben] is going to try it again because he thinks he screwed something up in the process. He’s also going to try printing with TPU, which we were just about to recommend for its flexibility.

There are many ways to cast metal on the (relatively) cheap. Have you considered Kinetic Sand?