Nanoparticles sound a bit like science fiction to minds of your average hacker — too esoteric and out of reach to be something we might get to work with in our own lairs — but [Ben Krasnow] of [Applied Science] over on YouTube has proven that they most definitely can be made by mere mortals, and importantly they can be tuned. With light. That’s right, nano particle growth appears to be affected very strongly by being illuminated with specific wavelengths, which locks-in their size, and thus defines their light-bending properties. This is the concept of photo mediated synthesis, which causes nanoparticles to clump together into different configurations depending on the wavelength. The idea is to start with a stock solution of Silver Nitrate, which is then reduced to form silver nanospheres which are then converted to larger silver nanoprisms, sized according to the wavelength of the illuminating source.

The process seems simple enough, with a solution of Silver Nitrate and Sodium Citrate being vacuum degassed to remove oxygen, and then purged by bubbling argon or nitrogen. Sodium Borohydride acts as a reducing agent, producing silver metal nanoparticles from the Silver Nitrate solution. The Sodium Citrate coats the silver nanoparticles, as they are produced, preventing them clumping together into a mushy precipitate. PVP 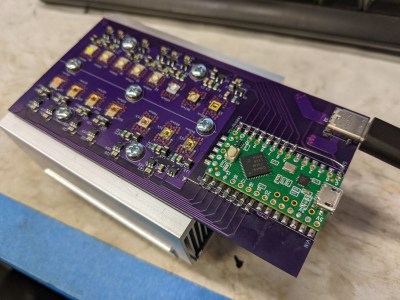 (Polyvinylpyrrolidone) is added, acting as a colloiding agent preventing the coated nanoparticles from clumping together, and helping keep the solution stable long enough for the photo mediated synthesis process to complete. Finally, the pH is adjusted up to 11 using sodium hydroxide. The resulting silver nanoparticle stock solution has a pale yellow colour, and is ready for the final particle size selection using the light source.

The light source was custom made because [Ben] says he couldn’t find something suitable off the shelf. This is a simple design using a Teensy to drive an array of PAM2804 LED drivers, with each one of those driving its own medium power LED, one for each of the different wavelengths of interest. As [Ben] stresses, the naïve approach of trying to approximate a specific colour with an RGB LED setup would not work, as although the human eye perceives the colour, the actual wavelength peak will be totally wrong, and the reaction will not proceed as intended. The hardware design is available on MultiSpectLED GitHub for your viewing pleasure.

Nanoparticles have all kinds of weird and wonderful properties, such as making the unweldable, weldable, enabling aluminium to be 3D printed, and even enabling the production of one of our favourite liquid toys, ferrofluid.

One thought on “Growing Silver Nanoprisms With Light”