It’s summer time in the Northern Hemisphere, and that means campfires for cooking hot dogs, keeping the mosquitoes away, and of course, making s’mores. For our far-flung friends, that’s a fire roasted marshmallow and a square of chocolate smashed between two graham crackers. So called because when you’re done, you’ll want s’more. It’s an easy enough recipe that any child can tell you how to make it. But what if you’re not a child? What if you don’t even have hands, because you’re an industrial robot? This is the challenge that [Excessive Overkill] has taken on in the video below the break. 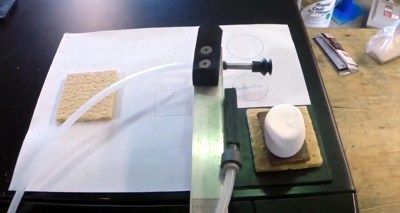 Starting with a Fanuc S-420 i W industrial robot built in 1997, [Excessive Overkill] painstakingly taught his own personal robot how to make S’Mores. Hacking the microwave with pneumatic cylinders to get the door open was a nice touch, and so are the vacuum grippers at the business end of the S’More-bot.

We know, we said you were supposed to make them on a campfire — but who wants to risk cooking their vintage robotic arm just to melt some chocolate?

There’s a lot of story behind this hack, and [Excessive Overkill] explains how they acquired, transported, and three phase powered an out of date industrial robot in another of their videos. Of course, this is Hackaday so it’s a subject that’s come up before in the reverse engineering of an industrial robot that we covered some time back.

Thanks [Phil] for the great tip!