After decades of delays and false starts, NASA is finally returning to the Moon. The world is eagerly awaiting the launch of Artemis I, the first demonstration flight of both the Space Launch System and Orion Multi-Purpose Crew Vehicle, which combined will send humans out of low Earth orbit for the first time since 1972. But it’s delayed.

While the first official Artemis mission is naturally getting all the attention, the space agency plans to do more than put a new set of boots on the surface — their long-term goals include the “Lunar Gateway” space station that will be the rallying point for the sustained exploration of our nearest celestial neighbor.

But before launching humanity’s first deep-space station, NASA wants to make sure that the unique near-rectilinear halo orbit (NRHO) it will operate in is as stable as computer modeling has predicted. Enter the Cislunar Autonomous Positioning System Technology Operations and Navigation Experiment, or CAPSTONE.

Launched aboard an Electron rocket in June, the large CubeSat will hopefully become the first spacecraft to ever enter into a NRHO. By positioning itself in such a way that the gravity from Earth and the Moon influence it equally, maintaining its orbit should require only periodic position corrections. This would not only lower the maintenance burden of adjusting the Lunar Gateway’s orbit, but reduce the station’s propellant requirement.

CAPSTONE is also set to test out an experimental navigation system that uses the Lunar Reconnaissance Orbiter (LRO) as a reference point instead of ground-based stations. In a future where spacecraft are regularly buzzing around the Moon, it will be important to establish a navigation system that doesn’t rely on Earthly input to operate.

So despite costing a relatively meager $30 million and only being about as large as a microwave oven, CAPSTONE is a very important mission for NASA’s grand lunar aspirations. Unfortunately, things haven’t gone quite to plan so far. Trouble started just days after liftoff, and as of this writing, the outcome of the mission is still very much in jeopardy.

Off to a Rocky Start

Rocket Lab’s Electron rocket performed perfectly during the June 28th launch, after which the booster’s third “kick” stage began a series of engine burns to gradually raise its orbit. After firing the engine six times in as many days, the kick stage performed the final trans-lunar injection (TLI) burn before releasing CAPSTONE on July 4th. This put the craft on a low-energy ballistic trajectory towards the Moon, which would be refined with a series of small course correction maneuvers over the course of the four month journey.

After entering the free-flying phase of the mission, CAPSTONE extended its solar arrays to start charging its batteries and stabilized itself in preparation for the first course correction burn which was scheduled for the following day. But shortly after communicating with NASA’s Deep Space Network (DSN) ground station in Madrid, contact with CAPSTONE was lost. 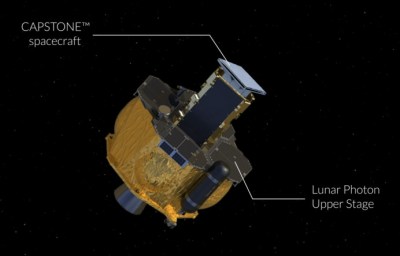 Communications were reestablished some 24 hours later, and analysis eventually determined that a malformed command from operators on the ground had put the spacecraft’s radio in an unexpected state, which in turn triggered the onboard fault-detection routines. The vehicle automatically reset itself and cleared the fault condition, as well as autonomously performed necessary maneuvers to keep itself on the intended flight path.

While CAPSTONE came away from this first anomaly unscathed, and ground controllers felt they could prevent the issue from reoccurring, the window for the first course correction maneuver had long since past. This meant a new maneuver had to be planned given the craft’s updated position and velocity, a delicate process which took additional time.

On July 7th CAPSTONE successfully performed the revised course correction burn (officially referred to as TCM-1), and placed itself on a trajectory within 0.75% of the calculated course.

After the initial communications difficulties were resolved, the mission continued without issue. A small course correction was made on July 12th, and the larger TCM-2 maneuver was performed on July 25th without incident. On August 26th, CAPSTONE reached an apogee of 1,531,949 kilometers (951,909 miles), the farthest away from Earth that its ballistic course would take it.

But on September 8th, just as the planned TCM-3 maneuver was about to end, the spacecraft’s attitude started to deviate. For reasons as of yet unknown, CAPSTONE’s reaction wheels were unable to counter the oscillation, and the vehicle entered into an uncontrolled tumble. With its antenna no longer pointed at Earth, communications were once again lost.

That evening mission controllers declared an operational emergency, which gave them access to additional capabilities of the DSN. Through this they were able to eventually receive a weak telemetry signal from CAPSTONE the following day, but the data looked grim. Due to its spinning, the craft’s solar arrays weren’t producing enough energy to charge the batteries, which was causing the spacecraft to reset frequently from lack of power. Worse, without energy to run the onboard heaters, the thrusters that would ultimately be needed to stop the tumble were now frozen solid.

But it wasn’t all bad news. It was determined that the TCM-3 burn had progressed far enough along that CAPSTONE was on the intended orbital trajectory — so while the spacecraft might be technically out of control, it was still heading to the Moon.

Currently, the last update we have from the CAPSTONE team was made on September 15th. The big news is that, even though the craft is still spinning, the solar panels are getting enough light that the batteries are charging. There’s even been enough energy in the budget to run the heaters, though they are apparently operating on a reduced duty cycle. Even still, it’s enough to take the chill off, and its hoped that the propulsion system will soon reach a high enough temperature that its functionality can be evaluated. Assuming they can be brought back online, firing the thrusters against the direction of rotation should get CAPSTONE back under control.

But we aren’t quite there yet. The update makes it clear that mission controllers are still analyzing the data to determine why CAPSTONE went out of control in the first place, and how to prevent it from happening again. The original mission timeline shows that a number of additional burns were planned to place the spacecraft in its intended orbit, and even then, that was just the beginning of it’s mission.

Luckily CAPSTONE shouldn’t need to make another course correction for a couple of weeks still, which will give engineers on the ground more time to assess the situation. Still, the fact that two out of the three major maneuvers have caused the vehicle to become unresponsive is troubling, especially when several more engine burns are still on the schedule.

26 thoughts on “CAPSTONE: The Story So Far”