What Is A Reaction Wheel?

A reaction wheel is important to any space mission: it’s the main method nearly every space probe uses to orient itself. It’s how a space telescope points at a star, and it’s how a Martian lander makes sure the heat shield is pointed towards the atmosphere before reentry. But how does it do this?

A reaction wheel is really just a flywheel — a heavy, spinning disk — that normally rotates at a few hundred to a few thousand RPM. This flywheel stores angular momentum, and changing this rotation speed imparts a tiny bit of torque around the axis of the flywheel. Think of it as a very advanced version of the infamous introduction to physics experiment where a volunteer sits on a spinny chair, holding a spinning bicycle wheel. The bicycle wheel stores angular momentum, and by tilting the wheel the volunteer can spin in their chair. No, it’s not a perfect representation of a reaction wheel, because the flywheels in a satellite don’t tilt, but the idea is the same: controlling a flywheel means you can spin. Do it on a satellite in microgravity, and you can spin the entire spacecraft.

Of course, reaction wheels aren’t the only way a spacecraft can orient itself. Satellites flying in Low Earth Orbit (or any magnetosphere, really), can use magnetorquers, or long electromagnets, to orient themselves within a magnetic field. The cubesats from several universities, in fact, use magnetotorquers for all their attitude control requirements. But magnetotorquers don’t work outside of a magnetosphere, and in deep space, space probes will also use thrusters in conjunction with reaction wheels. Using two methods of attitude control is a necessity for any deep space mission. Not only can one method fail, but reaction wheels can become ‘oversaturated’, or have the flywheel spin at the limits of its bearings. If this happens, the flywheel would need to be de-spun, which means thrusters must provide an opposing torque to keep the spacecraft from spinning out of control.

Despite these limitations, reaction wheels really are the best way to orient a small spacecraft. They only require electricity to keep them spinning, which is abundant thanks to solar panels. Using thrusters as the sole means of orientation uses valuable fuel, and the mass of that fuel would be better spent on sensors and experiments anyway.

Beyond Earth orbit, there have been numerous failures of reaction wheels in space. The Dawn mission to Vesta and Ceres is still continuing, but while this space probe was in orbit of Vesta, it suffered a loss of its reaction wheels. The cause of the failure was excessive friction in the bearings, and while engineers managed to get Dawn to Ceres, it wasn’t easy. A combination of the remaining reaction wheels and ion engines did allow Dawn to travel to Ceres, but it couldn’t even do that with its main antenna pointing at Earth.

In the summer of 2005, the Hayabusa spacecraft was cruising towards an asteroid named Itokawa, when a reaction wheel controlling its X axis failed. As Hayabusa had redundant reaction wheels, the mission continued towards the asteroid until September of 2005 when it assumed a 7 km orbit around its target asteroid. Just days after achieving this orbit, a second reaction wheel failed, this time controlling the Y axis. Despite this, Hayabusa landed on Itokawa momentarily, collected a small sample, and returned to Earth, sending a recovery capsule to land in the Australian desert.

While not launched into deep space, the FUSE spacecraft — the Far Ultraviolet Spectroscopic Explorer — was launched into orbit in 1999, and designed as a telescope for the far ultraviolet portion of the spectrum. This satellite was launched into a 760 km orbit around Earth (still close enough that magnetotorquers were also used in the design). After several years, two of the four reaction wheels showed a sudden increase in friction and stopped spinning. Engineers managed to update the software to use the two remaining wheels and magnetotorquers, allowing the mission to continue for several years but in 2007, the last two wheels failed, bringing an end to the mission.

But perhaps the greatest failure of reaction wheels in space is that of the Kepler spacecraft. This spacecraft was designed to sit in deep space and look at a small speck of the cosmos for planets passing in front of stars. If there was ever a mission that required accurate pointing and redundant reaction wheels, Kepler is it. Launched in 2009, the planet-finding mission was at first expected to last until 2016. This changed in the summer of 2012, when one of the four reaction wheels failed. Less than a year later, a second reaction wheel failed, causing the cancellation of the primary mission.

While the Dawn, Hayabusa, FUSE, and Kepler missions were saved by Apollo 13-level engineering heroics, all of these missions have another thing in common. The reaction wheels were all manufactured by Ithaco Space Systems. Sounds like a great opportunity for a root cause analysis, doesn’t it?

Finding The Failures In Reaction Wheels 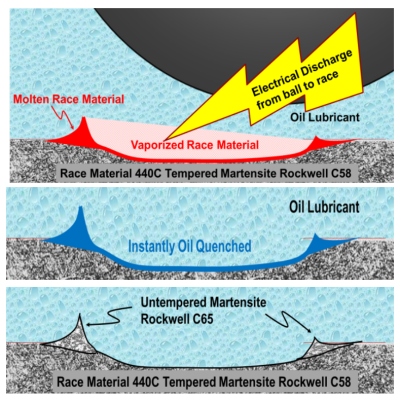 While the researchers provide the experimental data showing that bearings can fail due to a voltage across a bearing and a race, it’s unlikely we’ll ever be able to prove Kepler, FUSE, or Dawn suffered a reaction wheel failure because of space weather. To recover these space probes for an inspection of the bearing races we need to wait for the development of impulse drives or space pirates on a salvage mission.

40 thoughts on “Do Space Probes Fail Because Of Space Weather?”