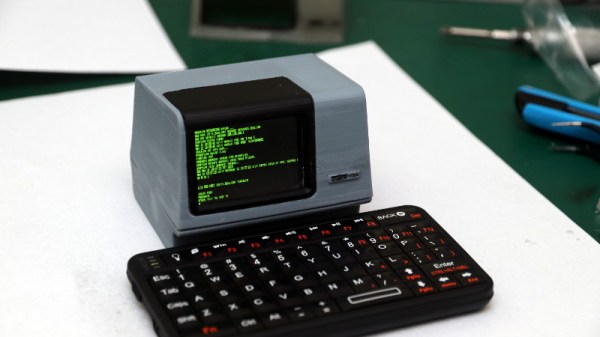 We spend a lot of time looking at retrocomputing in the form of gaming and home computers, but it’s true to say that minicomputers are less common than hardware projects. Perhaps it’s the size, cost, or even relative rarity of the original machines, but DEC minicomputers are a bit unusual around here. [Sprite_TM] hasn’t bought us a PDP11 or a VT102 terminal, but he’s done the next best thing in the form of a miniature working VT102 that also conceals a PDE11 emulator. It runs Tetris, which was originally developed on a Russian clone of the PDP11 architecture, and the 2.1BSD operating system.

Powering it all is an ESP32 module, and the PDP11 emulator is the well-known SIMH software. Porting this to the slightly limited environment of the microcontroller required a few compromises, namely the network stack and the configuration interface. In a particularly clever move [Sprite_TM] enabled BSD networking by writing an ESP32 layer that takes network packets via SIMD directly from BSD. It includes its own DHCP client and wireless network configuration tool, allowing an ancient UNIX-derived operating system from the 1970s to connect to the 21st century Internet through an emulator with its network code stripped out.

The case is a masterwork in OpenSCAD, a complete VT102 unit in miniature with a tiny LCD screen that when printed on a resin printer is a remarkable facsimile of the real thing. It doesn’t have a keyboard counterpart, but even with a miniature Bluetooth ‘board it still looks pretty impressive. In the video below the break he boots it into 2.1BSD, and importantly since it is a server operating system, logs into it from his laptop and plays a game of Zork.

[Sprite_TM] has brought us so many impressive projects over the years using the ESP32 and other parts. Maybe you have a favorite, but for us it’s the PocketSprite Game Boy-like tiny handheld console.