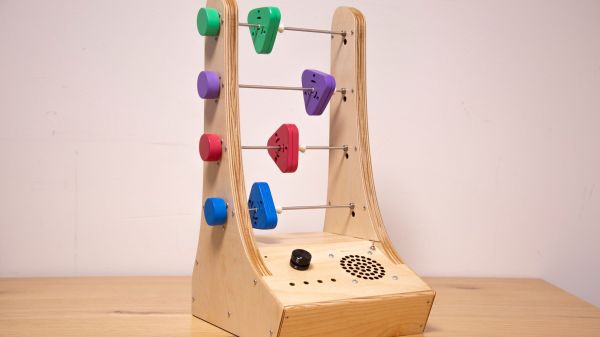 The abacus has been around since antiquity, and takes similar forms over the hundreds of cultures that have embraced it. It may be one of the first devices to be considered as having a “user interface” in the modern context — at least for simple arithmetic calculations. But using an abacus as the UI for a music synthesizer seems like something entirely new.

Part art concept project and part musical instrument, the “Abacusynth” by [Elias Jarzombek] is a way to bring a more visual and tactile experience to controlling a synth, as opposed to the usual knobs and switches. The control portion of the synth consists of four horizontal rods spanning two plywood uprights. Each rod corresponds to a voice of the polyphonic synth, and holds a lozenge-shaped spinner mounted on a low-friction bearing. Each spinner can be moved left and right on its rod, which controls the presence of that voice; spinning the slotted knob controls the modulation of the channel via photosensors in the uprights. Each rod has a knob on one side that activates an encoder to control each voice’s waveform and its harmonics.

In use, the synthesizer is a nice blend of electronic music and kinetic sculpture. The knobs seem to spin forever, so Abacusynth combines a little of the fidget spinner experience with the exploration of new sounds from the built-in speaker. The synth also has a MIDI interface, so it works and plays well with other instruments. The video below shows the hardware version of Abacusynth in action; there’s also a web-based emulation to try before you build.