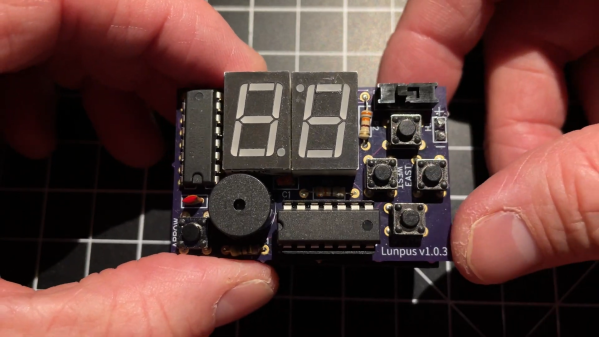 In a world where game consoles come with ever-higher resolutions and ever-faster frame rates, it’s refreshing to see someone going in the opposite direction: [Doug McInnes]’s latest project is a tiny handheld game console with probably the lowest-resolution graphics possible. Hardware-wise, it’s a small PCB containing an ATtiny84, two seven-segment LED displays, a speaker and a handful of buttons. It’s the software that gives this project its magic, and all of it is available on GitHub, along with schematics and a PCB layout.

The game is called Hunt the Lunpus, and as the name suggests it’s inspired by the 1970s classic Hunt the Wumpus. The player moves through a maze of interconnected rooms, trying to avoid slime pits and marauding bats while searching for the Lunpus, a sleeping monster that will eat the player unless they defeat it first by shooting it with arrows. Four pushbuttons provide directional control, with a fifth serving as an “action” button to start the game and fire those arrows.

Whereas Wumpus was originally a text-based adventure game, Lunpus is fully graphical: the seven-segment displays indicate the cave’s walls, and flash in different ways to alert the player to the various hazards. [Doug] explains the events as they happen in the video embedded below; while it might take a bit of practice to find your way at first, we can already picture ourselves wandering through the caves with our quiver full of arrows, ready to hunt some Lunpus. Who needs 4K graphics, anyway?

If you’re into minimalist game consoles, there’s plenty to choose from: the LEDBOY renders Space Invaders on just a few LEDs, while TWANG needs nothing more than a single LED strip. You can also explore more mazes on this 8×8 LED matrix, or even hunt Wumpuses in a slightly-higher resolution.