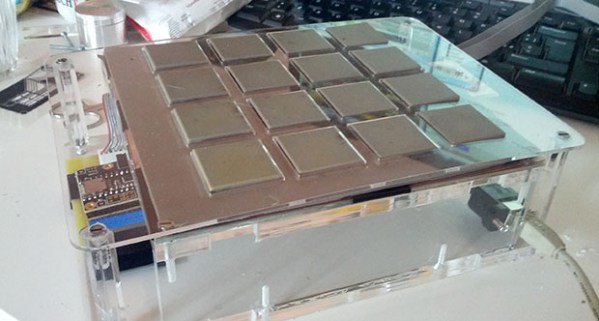 A staple of every recording studio today, the Akai MPC began as a simple sampling groove box in the early 90s. The form factor of a few force sensitive pads assignable to different samples should be familiar to anyone with a little bit of MIDI gear, but these are rarely custom-made devices. Now, it runs on a Teensy. [Michele] created his own MPC-style MIDI pad controller with the Teensy 3.0, the Teensy audio adapter board, and an ingenious PCB design that uses replacement MPC pads.

[Michele]’s MPC was first featured in the MIDI hacklet, but back then the only working component was the pads themselves. The velocity sensitive pads are made of two copper traces laid on a single acetate sheet. A bit of Velostat is glued to the back of the pad so when the pad is pressed, it contacts both of the traces. The harder the pad is pressed, the lower the impedance, and with everything sent to an analog pin, each pad becomes a force sensitive resistor.

With the key feature of an MPC taken care of, [Michele] turned his attention to the sampling and software of his device. The new Teensy 3.0 audio adapter board – and a great new library – takes care of everything. [Michele] doesn’t have a proper video of his MPC up yet, but he was able to film a random guy playing his machine at Rome Maker Faire yesterday. You can check that out below.