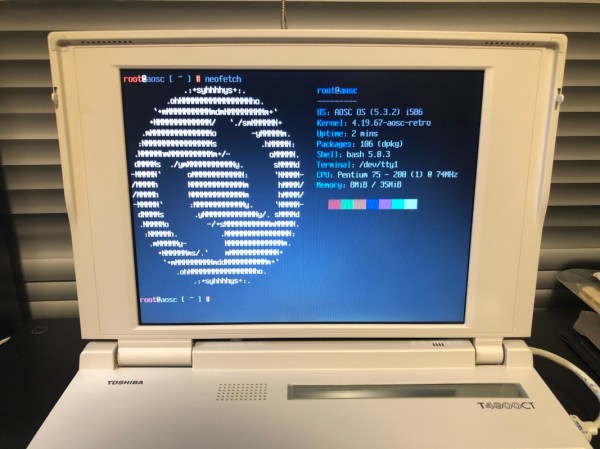 While Microsoft no longer supports those of its operating systems that were in heavy use into the early 2000s, support for old hardware is not typically something that you will have to worry about if you run Linux on your machines. Sure, there will be driver issues from time to time, and you might have to do some things by hand, but if you’re using legacy hardware you’ll want a Linux distribution of some sort. Especially if you’re running it on one of the first laptops to ever feature a Pentium processor of any kind.

This is a Toshiba T4900CT which [MingcongBai] has been able to spruce up by installing a simplified version of the AOSC OS Linux distribution. The distribution is known for its simplified user interface, and this particular one runs a “Retro” command-line-only version. Upon startup (which takes over two minutes), the user can view the hardware and software specs: Linux kernel 4.19.67 (released within the past year) on a 75 MHz Intel processor.

Getting old equipment to work, even if the software is available, is a challenge and this one stands out for the historical noteworthiness of the laptop. We didn’t see it connect to the Internet, but if it ever does we still keep Retro Hackaday up specifically for situations like this.