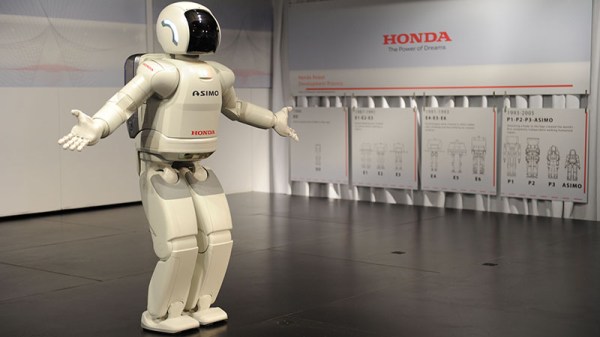 END_OF_DOCUMENT_TOKEN_TO_BE_REPLACED

Over the last two years, [Mark] at the Harford (and Baltimore) Hackerspace has been building 401k, a humanoid robot that will soon be able to walk on two legs, detect objects, and fight along with its comrades in the robot insurrection that leads to the extinction of man.

To get an idea of how complicated a humanoid robot is, realize the Honda ASIMO has been an ongoing project for over a decade now and can be easily defeated by stairs. [Mark] doesn’t have the benefit of millions of dollars in funding or dozens of lab assistants – in one video, [Mark] shows us the foot pads made out of [George Foreman] grill lids and hip joints made out of DVD players. Even though he’s using “unconventional” parts, 401k still has a very advanced pair of legs that model their human analog very well.

Even though it’s still a work in progress, there’s an incredible amount of work and expertise that is going into this build. [Mark] is wants to take 401k to this year’s RoboGames next month. We hope he gets his build walking in time, even for a few baby steps.

You can check out more of the 401k build vlog on [Mark]’s YouTube channel.