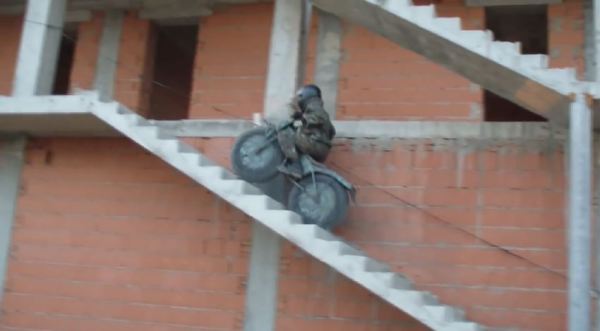 This has got to be one of the strangest motorcycles we’ve ever seen. It has huge tires, both wheels are chain driven, and it only weighs 100lbs or so — did we mention it also comes apart and fits into a dufflebag?

It’s what appears to be a home-made Russian bike of some sort, in fact, the YouTube title when translated is “ATV Suitcase” and they aren’t wrong… Anyway, it appears to be designed off of the American-made Rokon Trailbreaker, which is another AWD motorcycle with giant tires, huge ground clearance and extremely versatile — except this one Russian one is either really light, or the rider is ridiculously strong the way he throws the bike around.

In the following video the owner shows off the bike’s prowess climbing stairs, mountains, floating in water, and even uses it as a ladder to climb up a rock face — and then drags the bike up after him.

Plus he can disassemble it in a matter of minutes and fit it in a car smaller than a Fiat.