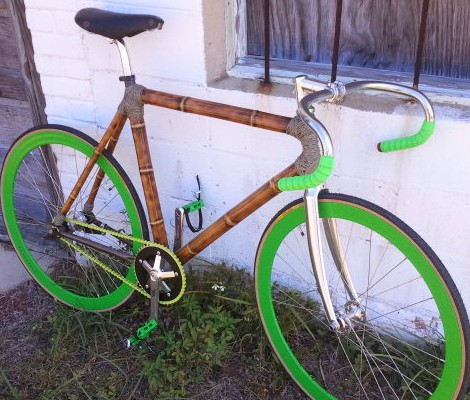 Reddit user [tkgarrett101] recently did away with expensive exotic materials for his bike frame and opted for a somewhat less processed form of natural building material, bamboo! The bike consists of a regular metal bike frame with a majority of the structural beams cut and replaced with bamboo poles. The bamboo is fit snug first with some expanding gorilla glue then tied in place with  hemp string and fiberglass resin. Instead of running cables along the frame the bike has coaster brakes and a two speed hub, this also preserves the simplistic look of the whole ensemble. [tkgarrett101] says his bike is not so cheap, the overall parts cost was around 800 bucks (USD)! Plus it weighs a whole lot for a fixed gear. Plus the alignment is a bit off on the seat post. Either way this thing would surely turn some heads!

Too rich for your blood? Check out this cardboard bike, or if that green isn’t bright enough for you how about some glowbars for night visibility.