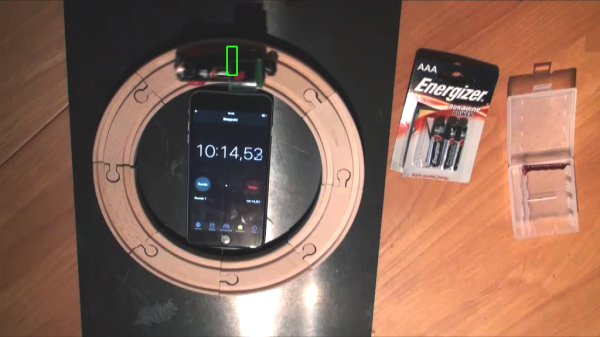 It’s been about a year and a half since the Batteroo, formally known as Batteriser, was announced as a crowdfunding project. The premise is a small sleeve that goes around AA and AAA batteries, boosting the voltage to extract more life out of them. [Dave Jones] at EEVblog was one of many people to question the product, which claimed to boost battery life by 800%.

Batteroo did manage to do something many crowdfunding projects can’t: deliver a product. Now that the sleeves are arriving to backers, people are starting to test them in the wild. In fact, there’s an entire thread of tests happening over on EEVblog.

One test being run is a battery powered train, running around a track until the battery dies completely. [Frank Buss] wanted to run this test, but didn’t want to manually count the laps the train made. He whipped up a script in Python and OpenCV to automate the counting.

The script measures laps by setting two zones on the track. When the train enters the first zone, the counter is armed. When it passes through the second zone, the lap is recorded. Each lap time is kept, ensuring good data for comparing the Batteroo against a normal battery.

The script gives a good example for people wanting to play with computer vision. The source is available on Github. As for the Batteroo, we’ll await further test results before passing judgement, but we’re not holding our breath. After all, the train ran half as long when using a Batteroo.