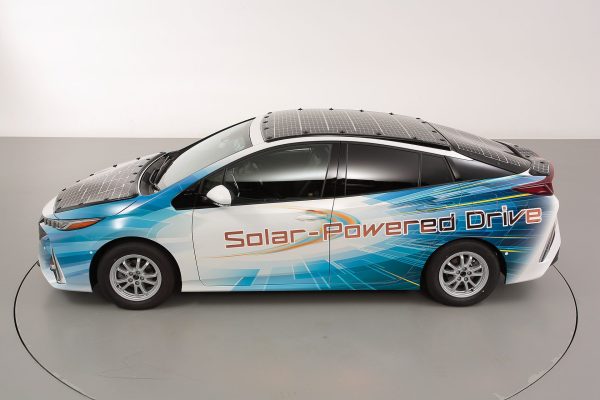 Who hasn’t thought of sticking a couple of solar panels onto an electric car’s roof to keep its battery at 100% charge while it’s parked out in the sun? While usually deemed impossible due to the large number and weight of PV solar cells required to get the necessary amount of energy, this hasn’t kept Toyota’s engineers from covering one of their Prius cars with 34+% efficient solar cells.

Some may remember the solar roof option which Toyota previously offered years ago. That system produced a mere 50 W and was only used for things like running the AC fans, indirectly extending the battery charge. In 2016 Toyota brought back this system, in a much improved version. This upped the power output to 180 W, allowing it to power all secondary electronics in the Prius, even allowing it to add a few extra kilometers (roughly 6.1 km/day) to the Prius’ range if one were so inclined.

This newest prototype pretty much goes for broke, reminding us of the cars used in the World Solar Challenge, such as the Dutch Stella and Stella Lux positive-energy solar cars by the team at the University of Eindhoven. Who coincidentally have done a spin-off, setting up a company to produce the Lightyear One, which at least on paper sounds amazing, and potentially may never have to plug it in.