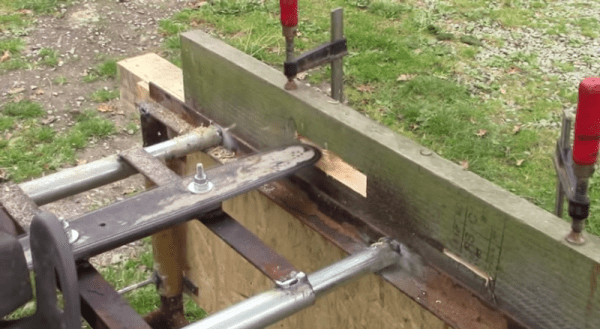 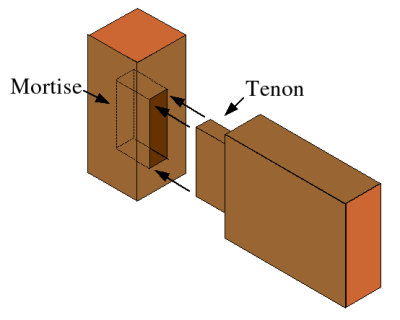 One common joinery method used in wood working is the mortise and tenon. A mortise is basically a hole in a piece of wood and the tenon is another piece of wood cut to tightly fit in that hole. The tenon is usually secured in place with either glue or a wooden pin or wedge.

The folks over at [WayOutWest] were building a fence and needed a way to cut a bunch of mortises in 4×4 inch posts to accept 2×6 inch rails. Although they had a chainsaw, trying to cut a mortise with it by hand turned out to be super dangerous because the chainsaw would kick up every time the tip of the blade touched the wood. The team had some parts kicking around so they made a fixture to hold the chainsaw as it is plunged into the 4×4’s.

The contraption’s frame is made from an old scaffolding stand and the slides are just pipes inside of pipes. The chainsaw is bolted to the slide and a lever moves it forward and back. A second lever moves the piece of wood getting mortised up and down so that the mortise can be cut to any width. This is a pretty ingenious build that only cost a little effort and will end up saving a bunch of time mortising countless fence posts.

END_OF_DOCUMENT_TOKEN_TO_BE_REPLACED [Morgan Rauscher] is a rather eccentric artist, inventor, maker, professor… jack of all trades. His latest project is called the Art-Bot – and it’s an 8′ robotic arm equipped with a chainsaw. Did we mention you can control it via arcade buttons?

He’s been building sculptures for over 10 years now, and has enjoyed observing the evolution of automated manufacturing – from CNC machines to laser cutters and even now, 3D printers. He loves the technologies, but fears machines are making it too easy – distancing us from the good old physical interaction it once took to make things with a few simple tools. His Art-Bot project attempts to bridge that gap by bringing tactile transference to the experience.

The cool part about the Art-Bot is that it is mostly made of recycled materials – in particular, bicycle parts!

Making a robot from bicycle parts is really not that difficult, and I highly recommend it.

The rest of the robot consists of electric actuators (linear), the control circuitry, and of course — a chainsaw. For safety’s sake, [Morgan] also built a polycarbonate wall around it to protect users from wood chips and other debris thrown from the robot.