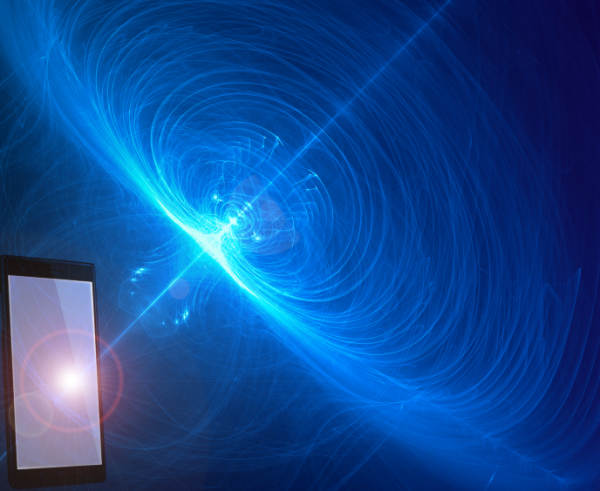 [Daniel Whiteson and Michael Mulhearn], researchers at the University of California, have come up with a novel method of detecting ultra-high energy cosmic rays (UHECR) using smartphones. UHECR are defined as having energy greater than 1018eV. They are rare and very difficult to detect with current arrays. In order to examine enough air showers to detect UHECR, more surface area is needed. Current arrays, like the Pierre Auger Observatory and AGASA, cannot get much larger without dramatically increasing cost. A similar THP Quarterfinalist project is the construction of a low-cost cosmic ray observatory, where it was mentioned that more detection area is needed in order to obtain enough data to be useful.

[Daniel Whiteson and Michael Mulhearn] and colleagues noted that smartphone cameras with CMOS sensors can detect ionizing radiation, which means they also will pick up muons and high-energy photons from cosmic rays. The ubiquitous presence of smartphones makes their collective detection of air showers and UHECR an intriguing possibility. To make all this happen, [Whiteson and Mulhearn] created a smartphone app called CRAYFIS, short for Cosmic RAYs Found In Smartphones. The app turns an idle smartphone into a cosmic ray detector. When the screen goes to sleep and the camera is face-down, CRAYFIS starts taking data from the camera. If a cosmic ray hits the CMOS sensor, the image data is stored on the smartphone along with the arrival time and the phone’s geolocation. This information is uploaded to a central server via the phone’s WiFi. The user does not have to interact with the app beyond installing it. It’s worth noting that CRAYFIS will only capture when the phone is plugged in, so no worries about dead batteries.

The goal of CRAYFIS is to have a minimum of one million smartphones running the app, with a density of 1000 smartphones per square kilometer. As an incentive, anyone whose smartphone data is used in a future scientific paper will be listed as an author. There are CRAYFIS app versions for Android and iOS platforms according to the site. CRAYFIS is still in beta, so the apps aren’t publicly available. Head over to the site to join up! 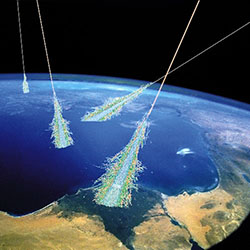 There are a number of crowdsourced projects to put data from around the world onto the Internet, tracking everything from lightning to aircraft transponders. [aelias36]’s entry for The Hackaday Prize is a little different. He’s tracking cosmic rays, and hopes to turn his low-cost hardware into the largest observatory in the world.

Cosmic rays are protons and other atomic nuclei originating far outside the solar system. They hit the very top of Earth’s atmosphere at a significant fraction of the speed of light, and the surface of the Earth is frequently sprayed with particles resulting from cosmic rays. Detecting this particle spray is the basis for all Earth-based cosmic ray observatories, and [aelias] has figured out a cheap way to put detectors in every corner of the globe.

The solution is a simple PIN diode. An op-amp amplifies the tiny signal created in the diode into something a microcontroller can use. Adding a GPS module and an Ethernet connection, this simple detector can send time, position, and particle counts to a server, creating a huge observatory with crowdsourced data.

The detectors [aelias] is working on isn’t great as far as cosmic ray detectors go; the focus here is getting a lot of them out into the field and turning a huge quantity of data into quality data. It’s an interesting project, and the only one with this scale of crowdsourcing we’ve seen for The Hackaday Prize.

You can check out [aelias]’ entry video below.