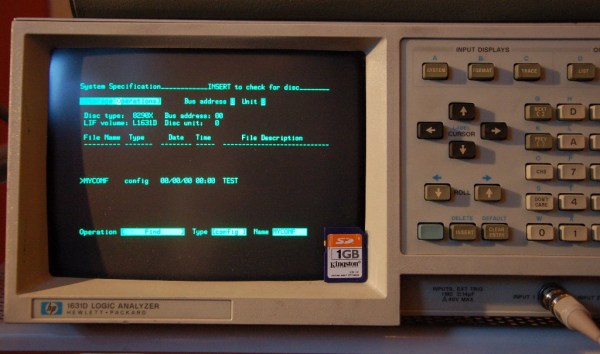 If you still use old test equipment on a regular basis, you probably have been frustrated by the lack of options for pulling data off these aging devices. Many higher-end devices are equipped with GPIB ports, which are general purpose buses for communicating with a variety of obsolete peripherals. Since GPIB disk drives aren’t too common (or practical) these days, [Anders] made a GPIB adapter that emulates a disk drive and stores data to an SD card.

[Anders] designed a PCB with a PIC microcontroller that plugs into a GPIB port. The PIC emulates a disk drive using the AMIGO protocol or the SS/80 protocol, which can be selected in a configuration file on the SD card. Most test equipment supports one of these two protocols, so his adapter should work with pretty much any GPIB-equipped kit.

Data is saved to a single image file on the SD card, which is encoded in a native HP disk format. The image file can be opened on Windows and Linux with some utilities that [Anders] mentioned on his project page. If you have any old test equipment withGPIB lying around and want to build your own, the schematic and source code are up on his site or [Anders] is selling bare boards.

Now if it’s a protocol converter that you need we’ve seen those in a couple of different varieties. 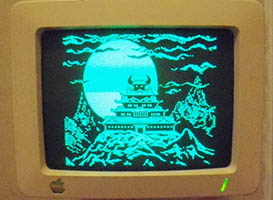 One of the most commonly frustrating things about having an old Apple ][ lying around in your basement or attic is the lack of software. While at one time in the late 80s you may have had your own copy of Oregon Trail, that disk is either lost or non-functional, and it’s pretty hard to get new disk images onto 5 1/4″ disks.

To solve this problem for himself, [Eric] came up with an Apple disk emulator. A project like this has been done many, many times over the last few decades, but [Eric] put his own twist on it: he doesn’t use a microcontroller. Instead, he used a simple USB FTDI device to talk to the Apple disk drive.

The FTDI device in question is a UM232H chip that takes a USB connection and turns it into an SPI bus. Of course the Apple ][ disk doesn’t speak SPI, so [Eric] needed to do a little logic conversion with a 74LS251 multiplexer and a 74LS161 counter.

In the video after the break, you can see [Eric] loading Apple disk images on a IIc from his new Intel Mac. It’s a neat build, but it’s not done yet: [Eric] plans on adding a microcontroller with an SD card, allowing just about every Apple ][ game every made to fit in your pocket. Yes, [Eric]’s project is quite similar to the A][ pocket serial host we saw just a bit ago, but this will hopefully have a lower component count.