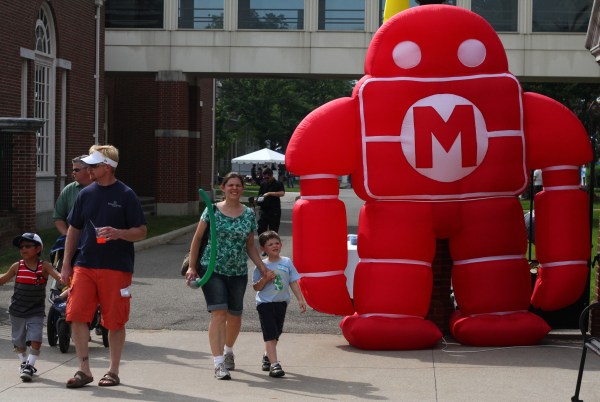 END_OF_DOCUMENT_TOKEN_TO_BE_REPLACED

Amateur rocketry has been popular for ages, with designs ranging from small toy-scale model rockets to large-scale liquid fuel designs with steerable fins. A team out of Portland State works on some large-scale amateur rockets that can fly to very high altitudes. Since the atmosphere is thin the further the rocket flies, steering fins aren’t incredibly effective once the rockets reach high altitude. A team of students tackled this problem by designing a cold-gas reaction module to steer high-altitude rockets.

The team chose nitrogen as their cold-gas propellant, which is stored in a carbon fiber tank. After passing through a regulator, the gas is routed to several gas solenoids and then to a custom 3d-printed de Laval nozzle. An Intel Edison is used to drive the system, which calculates the rocket’s orientation with a MPU-6050. Control loops use the orientation information and fire gas through any of several nozzle ports to steer the rocket.

The system does have some limits: the solenoids are either on or off, not variable, and they aren’t incredibly fast. Even with these limitations, the team is confident that their module will work great when it embarks on its maiden flight in a brand-new custom rocket next year. The team was also awesome enough to make all of their design files open-source so you can build your own (although they warn that it’s a bit complicated and dangerous). Check out the video after the break to see a test-run of the cold-gas reaction system.

Thanks for the tip, [Nathan]!

END_OF_DOCUMENT_TOKEN_TO_BE_REPLACED 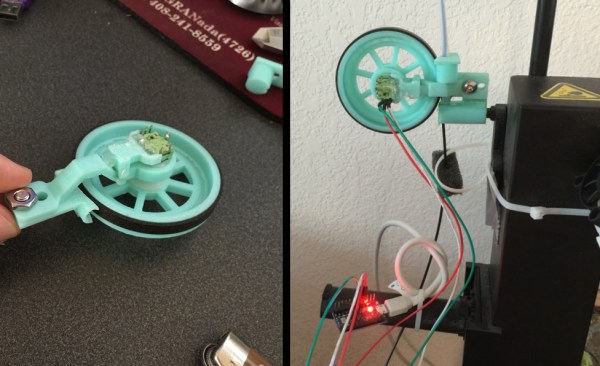 If you have used a 3D printer for any length of time, you’ve probably experienced a failed print caused by a clogged nozzle. If you’re not around to stop the print and the nozzle stays hot and full of filament for hours, the clog gets even worse. [Florian] set out to solve this issue with an encoder that measures filament speed, which acts as an early warning system for nozzle clogs.

[Florian] designed a small assembly with a wheel and encoder that measures filament movement. The filament passes under the encoder wheel before it’s fed into the 3D printer. The encoder is hooked up to an Arduino which measures the Gray code pulses as the encoder rotates, and the encoder count is streamed over the serial port to a computer.

When the filament slows down or stops due to a nozzle clog, the Python script plays a notification sound to let you know that you should check your nozzle and that your print might fail. Once [Florian] works out some of the kinks in his setup, it would be awesome if the script could stop the print when the nozzle fails. Have any other ideas on how to detect print failures? Let us know in the comments. 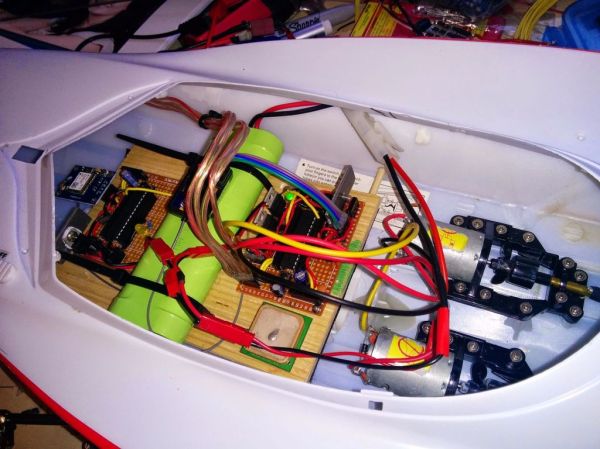 [Vlad] wrote in to tell us about his latest project—an RC boat that autonomously navigates between waypoints. Building an autonomous vehicle seems like a really complicated project, but [Vlad]’s build shows how you can make a simple waypoint-following vehicle without a background in autonomy and control systems. His design is inspired by the Scout autonomous vehicle that we’ve covered before.

[Vlad] started prototyping with an Arduino, a GPS module, and a digital compass. He wrote a quick sketch that uses the compass and GPS readings to control a servo that steers towards a waypoint. [Vlad] took his prototype outside and walked around to make sure that steering and navigation were working correctly before putting it in a boat. After a bit of tweaking, his controller steered correctly and advanced to the next waypoint after the GPS position was within 5 meters of its goal.

Next [Vlad] took to the water. His first attempt was a home-built airboat, which looked awesome but unfortunately didn’t work very well. Finally he ended up buying a $20 boat off of eBay and made a MOSFET-based motor controller to drive its dual thrusters. This design worked much better and after a bit of PID tuning, the boat was autonomously navigating between waypoints in the water. In the future [Vlad] plans to use the skills he learned on this project to make an autopilot for the 38-foot catamaran his dad is building (an awesome project by itself!). Watch the video after the break for more details and to see the boat in action.

END_OF_DOCUMENT_TOKEN_TO_BE_REPLACED 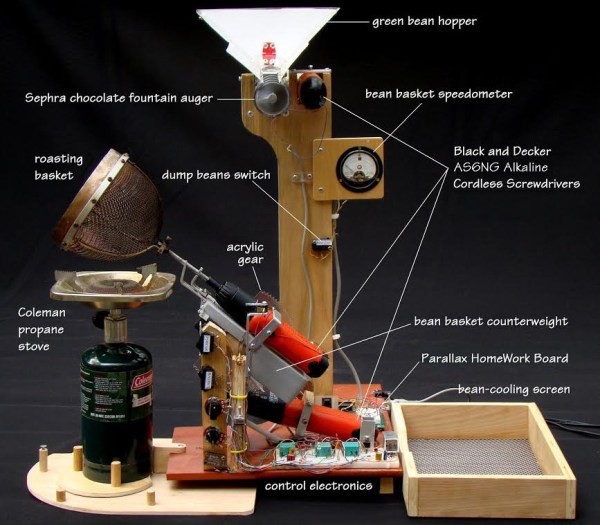 We’re no stranger to coffee roasting hacks, but it’s been a while since we’ve seen a new DIY roaster design. Thankfully [Larry] has been hacking together a small-batch roaster with a bunch of off-the-shelf parts. He was originally trying to make a fully-automated roasting system, but after a bunch of failed prototypes, he settled on a simple roaster design that works great.

[Larry]’s roaster is designed for small batches of coffee (about 3oz). He has a small hopper with a motorized auger (cannibalized from a chocolate fountain) which drops coffee down into his roasting basket. The basket is mounted to a cordless screwdriver which rotates it to agitate the beans inside. A small camp stove provides the heat, which is placed right under the basket. The beans churn around in the roasting basket and heat up until they reach the desired roast level (typically between first and second crack).

Once the roasting is complete, another hand drill rotates the basket assembly to dump out the coffee. [Larry]’s build includes an assortment of knobs and switches which control the auger, basket speed, bean dumping, and even a “speedometer” gauge that shows how fast the basket is rotating. Want to build your own roaster? Check out the instructions for building [Larry]’s roaster or some other builds we’ve featured before. 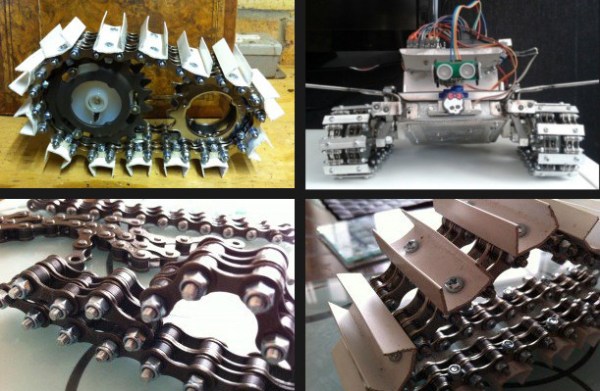 If you’re building a robot for off-road or rough terrain, chances are you’ve thought about using a tank-tread style drive. There are a ton of kits available with plastic tread and wheels, but they are typically really expensive or pretty flimsy. Instead of going with an off-the-shelf solution, [Paul B] designed a heavy-duty tank tread made with common bike chain and conduit.

Some DIY tread designs we’ve featured just use a single bike chain on either side of the tread pieces. This gets the job done, but each section of tread is usually bolted through the chain. This means that you can’t use a sprocket to drive the chain since all the bolt heads block where the teeth engage. Instead, these designs typically use drive wheels inside the tread, which are prone to slip under a heavy load. [Paul B]’s design is a bit different: it uses a DIY double-wide chain so he can bolt tread segments to the chain and still use a drive sprocket.

Constructing the double-wide chain took quite a bit of work. [Paul B] completely disassembled a couple of bike chains with a delinker tool and then reassembled the chain in a double-wide configuration with M3 bolts instead of the original chain pins. Each section of tread (made out of cut pieces of plastic conduit) bolts on the outside section of chain, and a sprocket runs on the inside. His DIY chain approach saves him money too, since double-wide chains are pretty expensive. Since his sprockets directly engage the drive train, his design should be able to handle as much torque as his drivetrain can put out. 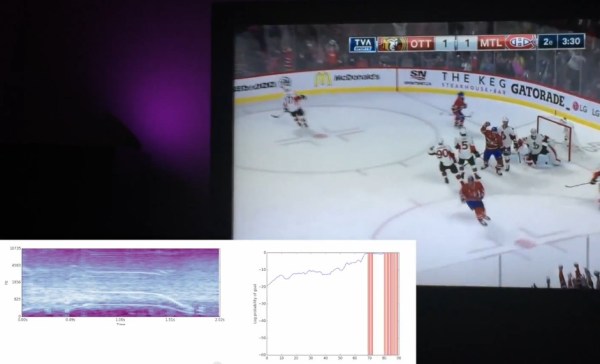 [François] lives in Canada, and as you might expect, he loves hockey. Since his local team (the Habs) is in the playoffs, he decided to make an awesome setup for his living room that puts on a light show whenever his team scores a goal. This would be simple if there was a nice API to notify him whenever a goal is scored, but he couldn’t find anything of the sort. Instead, he designed a machine-learning algorithm that detects when his home team scores by listening to his TV’s audio feed.

[François] started off by listening to the audio of some recorded games. Whenever a goal is scored, the commentator yells out and the goal horn is sounded. This makes it pretty obvious to the listener that a goal has been scored, but detecting it with a computer is a bit harder. [François] also wanted to detect when his home team scored a goal, but not when the opposing team scored, making the problem even more complicated!

Since the commentator’s yell and the goal horn don’t sound exactly the same for each goal, [François] decided to write an algorithm that identifies and learns from patterns in the audio. If a home team goal is detected, he sends commands to some Phillips Hue bulbs that flash his team’s colors. His algorithm tries its best to avoid false positives when the opposing team scores, and in practice it successfully identified 75% of home team goals with 0 false positives—not bad! Be sure to check out the setup in action after the break.