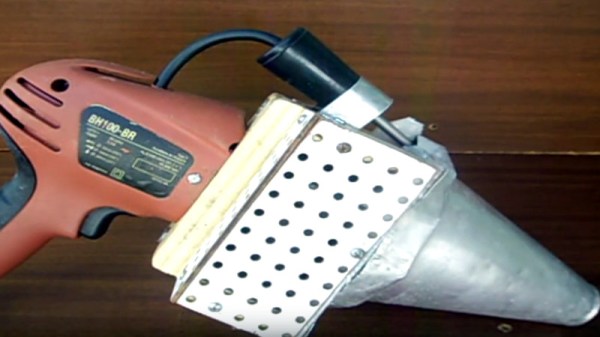 One of the essentials on the bench is some form of hot air gun. Whether it’s a precision tool intended for reworking PCBs or the broad-stroke item used for paint stripping, we’ve all got one somewhere. The paint-stripping variety are pretty cheap, but not as cheap as [Porcas Pregos e Parafusos]’s home made hot air gun. This slightly hair-raising device is made from a variety of junk parts and delivers hot air, though we suspect the possibility for burning the operator remains high.

At its heart is one of those mains powered water boiler elements designed to be lowered into a cup or similar, and since such devices would burn out if not cooled in some way, there is a fan from a microwave oven passing air over it. The whole thing sits inside an aluminium cone cut from a circular cake tin, and is held together on a wooden chassis to which the handle and power switch from a defunct electric drill provide the operator with something to hold on to.

As you can see from the video below the break it makes for an effective hot air gun, but one that we’re guessing you’d soon learn to avoid touching on the metal cone. Still, as a community we’re used to this with our soldering irons, as the RevSpace T-shirt puts it: “If it smells like chicken, you’re holding it wrong“.

END_OF_DOCUMENT_TOKEN_TO_BE_REPLACED