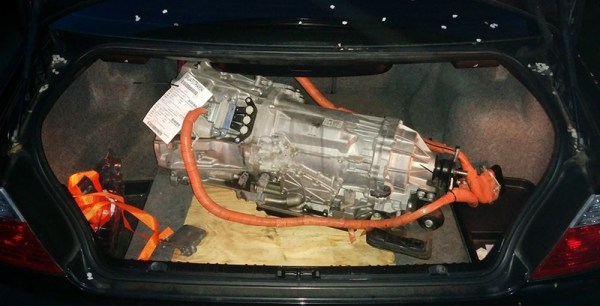 In the future, just about everyone will be driving an electric car. We’re seeing the beginnings of this, and that means electrics and hybrids are showing up in junk yards. What does that mean? Tons of big batteries and powerful motors to build an electric vehicle from recycled parts.

A few years ago, someone exceptionally smart did the math on the environmental friendliness of different makes of vehicles from cradle to grave. The most environmentally friendly car to buy wasn’t a Prius, Leaf, or Tesla, but a used car; an old Civic or Rabbit. The logic makes sense – after two or three hundred thousand miles under its timing belt, the Civic or Rabbit has already paid the cost of forging the body and refining the plastic. Obviously, then, the most environmentally friendly car would be reusing the batteries and motor out of a newer hybrid.

For his Hackaday Prize build, [mauswerkz] is taking a 2001 BMW 330ci coupe and replacing the motor and transmission with some salvaged EV equipment. In this case, it’s the transmission and inverter from a Lexus GS450h and the batteries from a Chevy Volt ‘Extended Range’. Where the magical junkyard [mauswerkz] is pulling this equipment out of is anyone’s guess, but he did it. Maybe you can too.

So far, [mauswerkz] has the charger out of the Chevy Volt hooked up to the inverter and transmission from the Lexus and is making stuff turn. It’s only running at 200V instead of the final voltage of 650, but it’s enough for a proof of concept. Now it’s just a matter of stuffing everything inside the BMW.

Of course going to a junk yard isn’t the only way to get an EV. The more enterprising builder might want to build their own EV completely from scratch, starting with a block of foam. Yes, it even looks better than the BMW.

Thanks to a Danish Engineer, you can turn pretty much any car into a hybrid. The addition is made in the form of a bolt on motor. As you can see in the picture, there is a motor that attaches to the rear wheels adding an additional 7 Hp. The batteries are stored in the trunk. Kits start at $3,500 and go up to $4,500 depending on battery selection. At least, that’s what they will be when they finally go on sale.