Do you like badges? Of course you like badges. It’s conference season, and that means it’s also badge season. Well good news, Tindie now has a ‘badge’ category. Right now, it’s loaded up with creepy Krustys, hypnotoads, and fat Pikas. There’s also an amazing @Spacehuhn chicken from [Dave]. Which reminds me: we need to talk about a thing, Spacehuhn.

On the list of ‘weird emails we get in the tip line’ comes Rat Grease. Rat Grease is the solution to rodents chewing up cabling and wires. From what we can gather, it’s a mineral oil-based gel loaded up with capsaicin; it’s not a poison, and not a glue. Rats are our friends, though, which makes me want to suggest this as a marinade, or at the very least a condiment. The flash point is sufficiently high that you might be able to use this in a fryer.

[Matthias Wandel] is the guy who can build anything with a table saw, including table saws. He posts his stuff online and does YouTube videos. A while back, he was approached by DeWalt to feature their tools in a few videos. He got a few hand tools, a battery-powered table saw, and made some videos. The Internet then went insane and [Matthias] lost money on the entire deal. Part of the reason for this is that his viewers stopped buying plans simply because he featured yellow power tools in his videos. This is dumpster elitism, and possibly the worst aspect of the DIY/engineering/maker community.

Elon Musk is the greatest inventor ever. No scratch that. The greatest person ever. Need more proof? The CEO of Tesla, SpaceX, and our hearts has been given the green light to build a high-speed underground train from Chicago O’Hare to downtown. Here’s the kicker: he’s going to do it for only $1 Billion, or $55 Million per mile, making it the least expensive subway project by an order of magnitude. Yes, Subways usually cost anywhere between $500 to $900 Million per mile. How is he doing it? Luck, skill, and concentrated power of will. Elon is the greatest human ever, and we’re not just saying that to align ourselves with an audience that is easy to manipulate; we’re also saying this because Elon has a foggy idea for a ‘media vetting wiki’.

There are rumors Qualcomm will acquire NXP for $44 Billion. This deal has been years in the making, with reports of an acquisition dating back to 2016. Of course, that time, the deal was set to go through but was apparently put on hold by Chinese regulators. Now it’s the same story again; there were recent rumors of Qualcomm buying NXP, and the story was later changed to rumors. We’re waiting for an actual press release on this one. It’s just another long chapter in the continuing story of, ‘where the hell are all the Motorola app notes and data sheets?’ 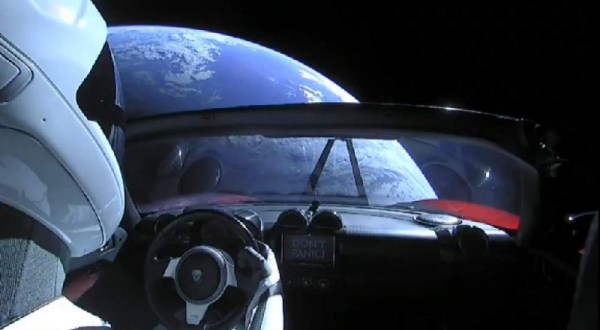 There’s a Starman, waiting in the sky. He’d like to come and meet us, but he’ll have to wait several million years until the Yarkovsky effect brings him around to Earth again.

In case you’ve been living under a rock for the past few weeks, SpaceX recently launched a car into space. This caused much consternation and hand-wringing, but we got some really cool pictures of side boosters landing simultaneously. The test launch for the Falcon Heavy successfully lobbed a Tesla Roadster into deep space with an orbit extending out into the asteroid belt. During the launch coverage, SpaceX said the car would orbit for Billions of years. This might not be true; a recent analysis of the random walk of cars revealed a significant probability of hitting Earth or Venus over the next Million years.

The analysis of the Tesla Roadster relies on the ephemerides provided by JPL’s Horizons database (2018-017A), and predicts the orbit over several hundred years. In the short term — a thousand years or so — there is little chance of a collision with anything. In 2091, however, the Tesla will find itself approaching Earth, and after that, the predicted orbits change drastically. As an aside, we should totally bring the Tesla back in 2091.

Even though the Tesla Roadster, its payload adapter, and the booster are inert objects floating in space right now, that doesn’t mean there aren’t forces acting on it. For small objects orbiting near the sun, the Yarkovsky effect is a huge influence on the orbit when measured on a timescale of millennia. In short, the Yarkovsky effect is a consequence of a spinning object being heated by the sun. As an object (a Tesla, or an asteroid) rotates, the side facing the sun heats up. As this side faces away from the sun, this heat is radiated out, imparting a tiny, tiny force. This force, over a period of millions of years, can send the Tesla into resonances with other planets, eventually sending it crashing into Earth, Venus, or the Sun.

The authors of this paper find there is a 6% chance the Tesla will collide with Earth and a 2.5% chance it will collide with Venus in the next one Million years. In three Million years, the probability of a collision with Earth is 11%. These are, according to the authors, extremely preliminary calculations and more observations are needed. If the Tesla were to hit the Earth, it’s doubtful whatever species populates the planet would notice; the mass of the Tesla is only 1250 Kg, and Earth flies through meteoroids weighing that much very frequently.