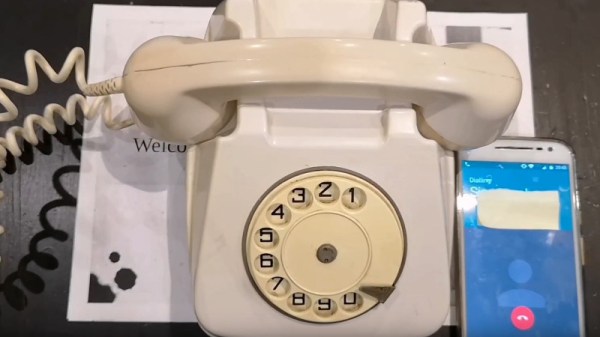 A few weeks ago we featured a project from [Dan], a work-in-progress in which he was attaching an EMF 2018 electronic conference badge to a rotary phone. At the time we looked forward to his progress, expecting maybe to see it in our travels round the field at EMF 2021. We have to say we did him a disservice then, because he’s made excellent progress and has now turned it into a fully functional cellular rotary phone.

When we left him he’d interfaced the dial to the badge and not a lot else, but it was enough to spark our interest because we think there should be more re-use of old electronic conference badges. Since then he’s reverse engineered the original bell with the help of a motor driver and a cheap DC-to-DC converter, and the handset with the guts of a Bluetooth headset because in experimenting he managed to kill the badge’s audio circuitry.

The result can be seen in the video below the break, and we have to admit it looks pretty good. Depending where you are in the world you’ll either love or hate the ringing sound, but that is of little consequence to the utility of the device. If you have a drawer full of conference badges gathering dust, perhaps it’s time to give them a second look.

END_OF_DOCUMENT_TOKEN_TO_BE_REPLACED 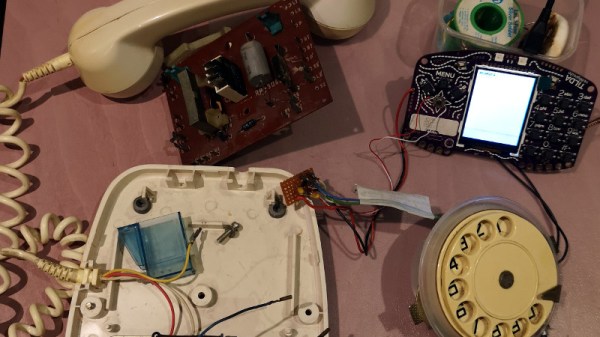 We have covered the astonishing diversity of conference badges to a great extent over the years, and we are always pleased and surprised at the creativity and ingenuity that goes into their creation. But the saddest thing about so many badges is that after the event they go into the drawer and are never touched again, such a missed opportunity!

It’s a trend that [Dan] has reversed though, with his rotary dial phone brought to life with an EMF Tilda MkIV. This was the badge from last year’s EMF Camp 2018, and its defining feature was a built-in GSM mobile phone. We didn’t give it a full review at the time because it has problems with the GSM part at the event and it would have been unfair to display what was an amazing badge in a negative light, but once we got it home it was straightforward enough to put a commercial SIM in the slot and use the public networks with it.

[Dan]’s phone is an Eastern European model that came to him through his grandfather. Inside it’s a relatively conventional design, into which he’s patched a couple of the Tilda’s I/O lines from the dial through a debounce circuit. But simply selecting a couple of lines wasn’t enough, as most of those on its expansion port come via a port expander. He needed inputs that could generate an interrupt, so he hijacked a couple from the on-board joystick. He’s included Python code which you can see in action in the video below. It’s important to note that he’s yet to hook up the audio to the badge so this is a work in progress, but it’s an interesting project nevertheless.

Rotary phones hold a special place among hardware hackers, we’ve featured many projects including them. This isn’t the first GSM rotary phone we’ve brought you, and don’t forget they can also talk via Bluetooth.

END_OF_DOCUMENT_TOKEN_TO_BE_REPLACED 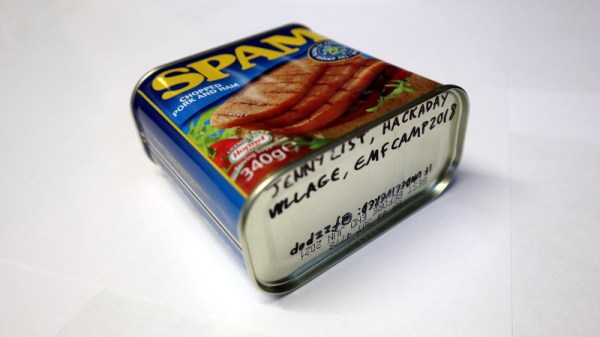 A large hacker camp is in microcosm a city, it has all the services you might expect to find in a larger settlement in the wider world. There is a telecommunication system, shops, bars, a health centre, waste disposal services, a power grid, and at some camps, a postal system. At Electromagnetic Field, the postal system was provided by the Sneakernet, a select group of volunteers including your Hackaday scribe under the direction of the postmaster Julius ter Pelkwijk. I even had the fun of delivering some chopped pork and ham. (More on that later.) END_OF_DOCUMENT_TOKEN_TO_BE_REPLACED 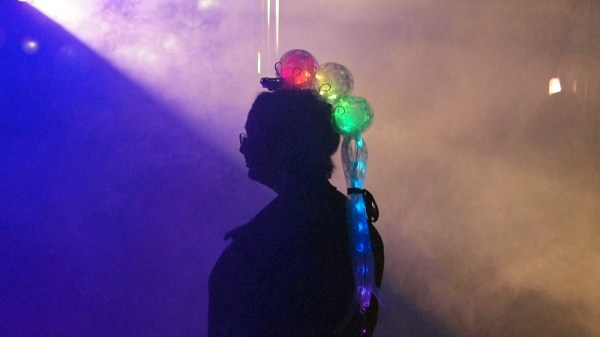 At the recent Electromagnetic Field hacker camp in the UK, one of the highlights was the Null Sector, a cyberpunk-themed zone best described as something close to the set of Blade Runner made from shipping containers, clever props, and lighting. Our community rose to the occasion with some truly impressive costumes and wearable electronics, lending the venue a real authenticity.

Among the many creations on show there was one that stood quite literally head and shoulders above the rest. [Chebe]’s colour stealing sound reactive LED headdress is a confection of Neopixels, organza, and transparent floor protectors on a wire frame, driven by a Lillypad wearable microcontroller board with a microphone and colour sensor attached. The resulting sound-and-colour-reactive display stood out across a crowded venue full of hackers who’d all made their own efforts to produce similar outfits, which is really saying something!

The Lillypad and LEDs are standard fare, but the wire part of this project isn’t, and that’s what makes it rather interesting from our perspective. Anyone can make something that goes over their head, but to make something that’s comfortable takes a bit of effort and thought. Have you ever tried a set of ill-fitting sunglasses? If you have then you might understand. In this case stiff garden wire is used, bent to shape and joined with rolled-up tape, before being covered with wound-on ribbon for extra comfort. A Hackaday scribe travels the field at a hacker camp, and though [Chebe]’s cranium is a little more petite than the Hackaday bonce it was certainly an enveloping fit when we tried it.

Anyone can attach an LED to an item of clothing and call it a wearable. But to be noticed like this one it has to be done with style. If you’ve not had your fill of this topic, we suggest you continue with the Hackaday Belgrade talk from our friend [Rachel “Konichiwakitty” Wong]. 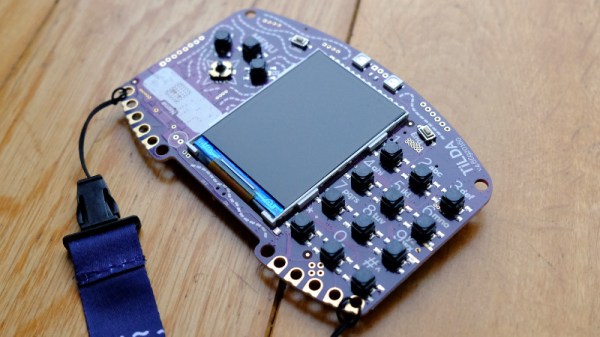 As is always the case with a significant hacker camp, we’ve been awaiting the official badge announcement for the upcoming Electromagnetic Field 2018 hacker camp with huge interest. These badges, for readers who may have been on Mars for the past few years, are part of a lively scene of wearable electronics at hacker conferences and camps, and can usually be expected to sport a fully-fledged computer in their own right along with other special functionality.

The announcement of the 2018 badge, dubbed the TiLDA Mk4, does not disappoint. We’d been told that there would be an on-site GSM network for which the welcome packs would contain a SIM, and the well-prepared among us had accordingly dusted off our old Nokia handsets alongside our DECT phones. What we hadn’t expected was that the SIM would be for the badge, because the Mk4 is a fully-fledged hackable mobile phone in its own right. The network will be fully functional for  calls and texts within the camp, though since it does not explicitly say so we expect that external calls may be an impossibility. Afterwards though it will remain a usable device on any GSM network, giving it a lease of post-camp life that may see more of them staying in use rather than joining the hacker’s dusty collection in a drawer.

Beyond the party-piece phone it appears to follow the lead of its 2016 predecessor, with the same Python environment atop a TI chipset including an MSP432E4 ARM Cortex M4F microcontroller running at 120MHz with 256kB of internal and 8MB of external RAM, a CC3210 WiFi processor, and the usual battery of sensors, LEDs and GPIOs. Importantly, it also has a Shitty Add-on connector. The 2016 badge was remarkably easy to develop for, and we expect that there will soon be an impressive array of apps for this badge too. If any reader would like to put together a Hackaday feed reader app, we can’t offer you fortune but fame such as we can bestow awaits.

We’ll bring you more information as we have it about the TiLDA Mk4, as well as a hands-on report when one lands in front of us. Meanwhile you’d like to see a retrospective of past EMF badges as a demonstration of where this one has come from, have a read of our coverage of the 2016 and 2014 badges. 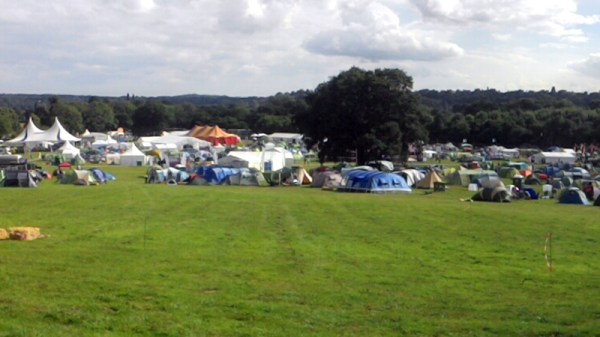 There is an air of excitement among the hackerspaces of Europe, because this month is hacker camp season. In Denmark they have Bornhack beginning on Thursday, in Italy IHC was held earlier in the month, while here in the UK we are looking forward to Electromagnetic Field. We’re excited be at Eastnor Castle for Electromagnetic Field at the cusp of August and September for several days under canvas surrounded by our community’s best and brightest work. We’ll even have a Hackaday Readers’ Village this year!

If you’ve never been to a hacker camp before, this is one that’s not to be missed. Technically this is camping, but where every structure from the smallest tent upwards has mains power and gigabit Ethernet. It’s the equivalent of a music festival if you replace the music with technology and other cool stuff from our world. There are talks on a huge variety of fascinating subjects, the chance to see up close some of the things you’ll have read about here on Hackaday, and best of all, a significant proportion of Europe’s hackerspace communities all together in one place. They are a uniquely stimulating and exciting environment.

END_OF_DOCUMENT_TOKEN_TO_BE_REPLACED 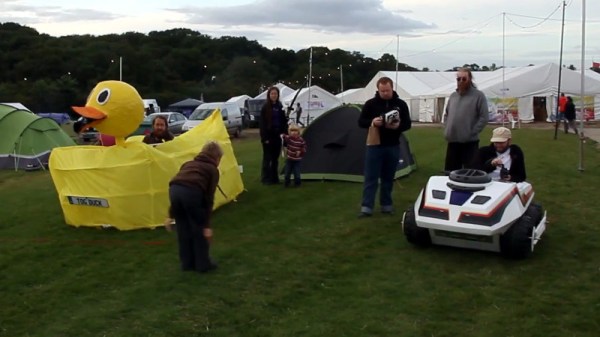 There is joy in the hearts of British and European hardware and software hackers and makers, for this is an EMF Camp year. Every couple of years, our community comes together for three summer days in a field somewhere, and thanks to a huge amount of work from its organizers and a ton of volunteers, enjoys an entertaining, stimulating, and engrossing hacker camp.

One of the features of a really good hacker camp are the electric vehicles. Not full-on electric cars, but personal camp transport. Because only the technically inept walk, right? From Hitchin’s Big Hak to TOG’s duck, with an assortment of motorized armchairs and beer crates thrown in, these allow the full creativity of the hardware community free rein through the medium of overdriven motors and cheap Chinese motor controllers.

This year at EMF Camp there will be an added dimension that should bring out a new wave of vehicles, there will be a Hacky Racers event. Novelty electric vehicles will compete for on-track glory, will parade around the camp, and will no doubt also sometimes release magic smoke. There is still plenty of time to enter, so if you’re going to EMF, get building!

We have an interest in these little electric vehicles, not least because there may well be a Hackaday-branded machine on the tarmac. We’d like to feature some of them over the weeks running up to the event, so if you are building one and have a write-up handy, please tell us about it in the comments. Charge your batteries, and we’ll see you there!