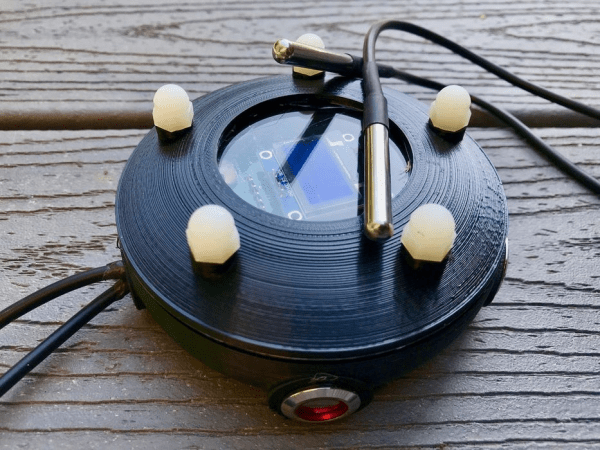 In Alaska, the impact of climate change is easy to see. Already the melting permafrost is shifting foundations and rocking roads. Hotter summers are also turning food caches from refrigerators into ovens.

[rabbitcreek]’s friend builds food caches with kids as part of a program to teach them traditional native activities. Food caches are usually inside buried boxes or small cabins raised on poles. Both are designed to keep hangry bears out. As you might expect, monitoring the temperature at these remote sites is crucial, so the food doesn’t spoil. His friend wanted a set-and-forget temperature monitoring system that could collect data for eight months over the winter.

The Alaska Datalogger carried a pretty serious list of requirements. It has to be waterproof, especially as ice and snow turn to water. Ideally, it should sip power and have a long battery life anyway. Most importantly, it has to be cheap and relatively easy for kids to build.

This awesome little data spaceship is designed around an O-ring used in domestic water purifiers. The greased up O-ring fits between two 3D printed enclosure halves that are shut tight with nylon bolts. Two waterproof temperature probes extend from the case—one inside the cache and the other outside in the elements. It’s built around an Adafruit Feather Adalogger and powered by an 18650 cell. The data is collected by visiting the site and pulling the SD card to extract the text file. There’s really no other way because the sites are far out of cell coverage. Or is there?

Though it probably wouldn’t survive the last frontier, this self-sufficient weather station is a simple solution for sunnier situations.