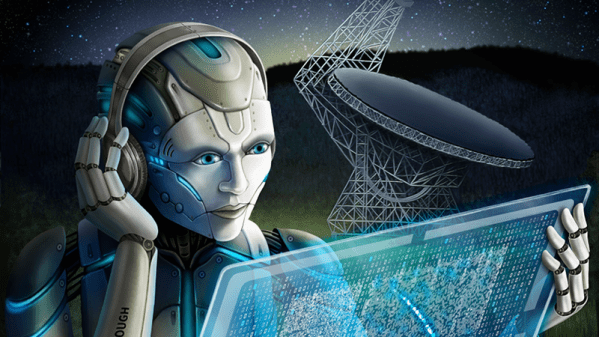 Scientists don’t know exactly what fast radio bursts (FRBs) are. What they do know is that they come from a long way away. In fact, one that occurs regularly comes from a galaxy 3 billion light years away. They could form from neutron stars or they could be extraterrestrials phoning home. The other thing is — thanks to machine learning — we now know about a lot more of them. You can see a video from Berkeley, below. and find more technical information, raw data, and [Danielle Futselaar’s] killer project graphic seen above from at their site.

The first FRB came to the attention of [Duncan Lorimer] and [David Narkevic] in 2007 while sifting through data from 2001. These broadband bursts are hard to identify since they last a matter of milliseconds. Researchers at Berkeley trained software using previously known FRBs. They then gave the software 5 hours of recordings of activity from one part of the sky and found 72 previously unknown FRBs.