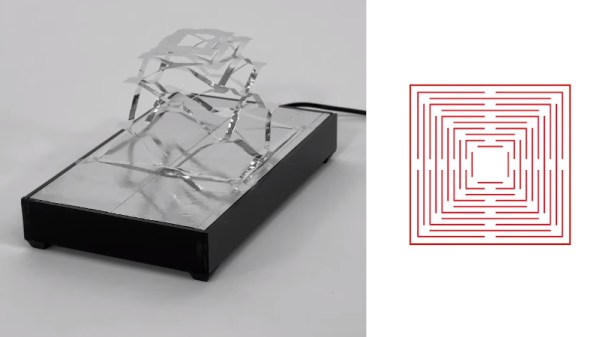 Mylar has a lot of useful properties, and as such as see it pop up pretty often, not just in DIY projects but in our day-to-day lives. But until today, we’ve never seen a piece of Mylar jump up and try to get our attention. But that’s precisely the promise offered by ElectriPop, a fascinating project from Carnegie Mellon University’s Future Interfaces Group.

The core principle at work here is fairly simple. When electrostatically charged, a strip of Mylar can be made to lift up vertically into the air. Cut that strip down the center, and the two sides will repel each other and produce a “Y” shape. By expanding on that concept with enough carefully placed cuts, it’s possible to create surprisingly complex three dimensional shapes that pop up once a charge is applied. A certain degree of motion can even be introduced by adjusting the input power. The video after the break offers several examples of this principle in action: such as a 3D flower that either stands up tall or wilts in relation to an external source of data, or an avatar that flails its arms wildly to get the user’s attention.