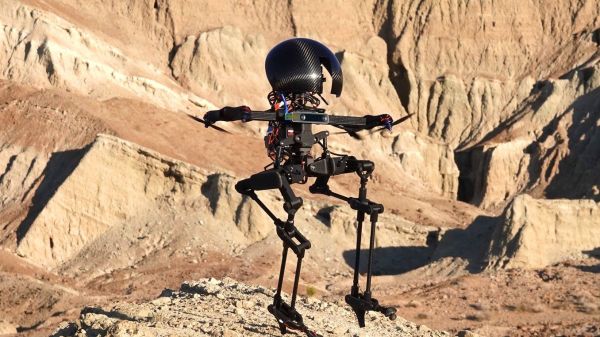 We appear to have a new entry atop the “Robots That Creep Us Out” leader board: meet LEONARDO, the combination quadcopter/bipedal robot.

LEONARDO, a somewhat tortured name derived from “LEgs ONboARD drOne,” is actually just what it appears to be: a quadcopter with a set of legs. It comes to us from Caltech’s Center for Autonomous Systems and Technologies, and the video below makes it easy to see what kind of advantages a kinematic mash-up like this would offer. LEO combines walking and flying to achieve a kind of locomotion that looks completely alien, kind of a bouncy, tip-toeing step that really looks like someone just learning how to walk in high heels. The upper drone aspect of LEO provides a lot of the stabilization needed for walking; the thrust from the rotors is where that bouncy compliance comes from. But the rotors can also instantly ramp up the thrust so LEO can fly over obstacles, like stairs. It’s also pretty good at slacklining and skateboarding, too.

It’s easy to see how LEO’s multimodal locomotion system solves — or more accurately, avoids — a number of the problems real-world bipedal robots are going to experience. For now, LEO is pretty small — only about 30″ (76 cm) tall. And it’s rather lightly constructed, as one would expect for something that needs to fly occasionally. But it’s easy to see how something like this could be scaled up, at least to a point. And LEO’s stabilization system might be just what its drunk-walking cousin needs.

END_OF_DOCUMENT_TOKEN_TO_BE_REPLACED

The ESP8266 is finding its way into all sorts of projects these days. It’s a capable little device, to be sure, but we’d have to say that finding it running a quadruped robot that can hop and run was a little unexpected. And to have it show up in such an adorable design was pretty cool too.

From the looks of [Javier Isabel]’s build log, he put a lot of thought into [Kame]. All the body parts and linkages are 3D printed from PLA, with the nice touch of adding a contrasting color. The legs are powered by eight high-speed Turnigy servos, and good quality bearings are used in the linkages. A NodeMCU runs the show with custom oscillator algorithms that control the various gaits, including the hopping motion. The BOM even lists “Adhesive 12mm diameter eyes” – perhaps that’s some sort of slang for the more technically correct “googly eyes.”

Built primarily as a test platform for studying different gaits, there doesn’t seem to be much in the way of sensors in [Kame]’s current incarnation. But with an ESP8266 under the hood, the possibilities for autonomous operation are good. We look forward to seeing where this project goes next. And we kid about the cuteness factor, but never doubt the power of an attractive design to get the creative juices flowing.

We’ve covered a lot of quadruped robots before, and a lot of them seem to trend toward the cute end of the spectrum. Check out this baby-quad that’s learning to walk or this quad that thinks it’s a puppy.