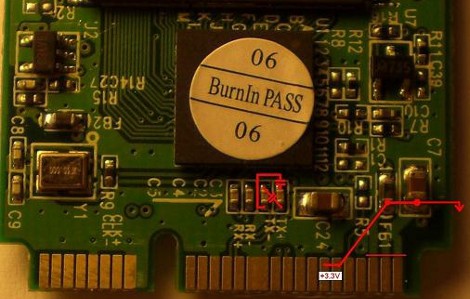 [Trucki] wanted to upgrade the internal storage on his JooJoo. There’s an mSATA connector inside but devices that use that protocol are hard to come by and when you do they’ll cost you and arm and a leg. He knew he could get solid state drives cheaply that use the mini PCI Express standard, which is mechanically compatible with mSATA. So he set out to alter a mini PCI Express device to work with the mSATA protocol. This entails swapping the transmission lines and rearranging the voltage traces on the connector. To handle the TX- and TX+ lines he desoldered their decoupling capacitors and realigned them to trade their signals. For the 3.3V lines he had to cut the feed and solder jumper wire to the correct pads.

This is some nice work which let him add a 32 GB drive for just sixty Euros. Since the device only comes with a 4 GB SSD an upgrade is almost mandatory if you’re planning to install an alternate OS on the Joojoo. Joojoo hacks are starting to trickle in as non-fanboys get their hands on the iPad alternative. The custom OS forum for the device tells the tale of successful installs of Windows 7, OSX, Android, and Jolicloud.

So far the only one to have a how-to is Windows 7, but we’re sure that will change quickly. When Microsoft’s offering is installed on the device it get about four hours of use per charge which is fairly decent. We’d love to get our hands on one and try it out with Android but the $499 price tag is still a hurdle for us. We’re not saying it’s over priced, as it comes with a lot under the hood. Even at that price we think it blows the aPad out of the water.