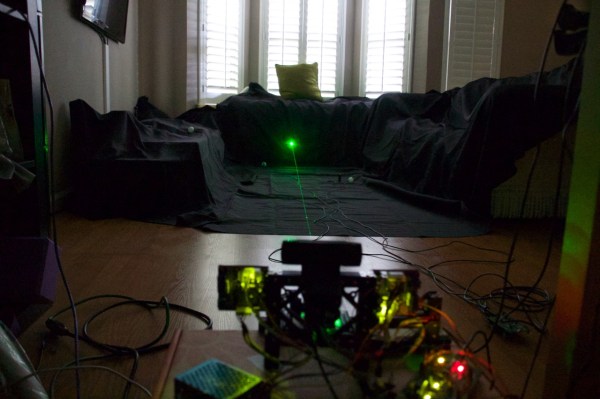 Last year, [Alvaro] built a laser turret robot for the DEFCONBOTs competition. It worked pretty well, but this year, he decided to step it up a notch. Now instead of moving the entire robot laser array, he’s using galvanometers to move only the laser — he’s essentially built a mini laser projector.

A galvanometer is basically a very sensitive ammeter that moves — it can also be used as a very precise electro-mechanical actuator, for say, moving a tiny mirror. As you can imagine, you can actually build home-made galvanometers — but it’s really not that easy. Instead, [Alvaro] opted to order a few laser show controllers on eBay, and hack his way to a solution — we approve.

Wiring up the galvanometers and making some circuitry for them was the easy part. The tricky part is automating the system.