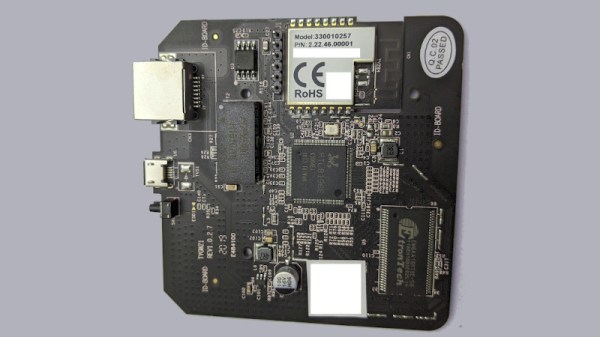 For years, Europeans have been browsing the central aisles of the German Aldi and Lidl supermarket chains, attracted by the surprising variety of transitory non-grocery bargains to be found there. There are plenty of temptations for hackers, and alongside the barbecues and Parkside tools at Lidl last year was a range of Zigbee home automation products. Every ZigBee network requires some form of hub, and for Lidl this comes in the form of a £20 (about $28) Silvercrest Home Gateway appliance. It’s a small embedded Linux computer at heart, and [Paul Banks] has published details of how it can be hacked and bent to the user’s will.

Under the hood is a Realtek RTL8196E MIPS SoC with 16Mb of Flash and 32 Mb of memory. Gaining control of it follows the well trodden path of finding the bootloader, dumping the firmware, and re-uploading it with a known password file. If you’ve done much hacking of routers and the like you’ll recognise that this quantity of memory and Flash isn’t the most powerful combination so perhaps you won’t be turning it into a supercomputer, but it’s still capable enough to be integrated with Home Assistant rather than the cloud-based services with which it shipped.

There was a time when repurposing routers as embedded Linux machines was extremely popular, but it’s something that has fallen from favour as boards such as the Raspberry Pi have provided an easier path. So it’s good to see a bit of old-fashioned fun can still be had with an inexpensive device.

If you fancy a bit more German budget supermarket goodness, feast your eyes on an Aldi stick welder!