The holidays are almost here, and with that comes the traditional Mass Consumption of Consumer Goods and Gift Exchange. 3D printers are getting really good and really cheap, and it’s inevitable that a lot of 3D printers will be given as gifts this year. Be careful if you’re giving or receiving one of these printers: they can cause fires as [Ben Hencke] found out when diagnosing a problem with a printer he bought this year.

The printer in question is the Monoprice Maker Select V2, a Prusa i3 clone with impressive specs for a $300 printer. This printer is a rebranded Wanhao Duplicator i3, and we’ve reviewed it favorably. It’s a capable printer that beats the pants off of any Kickstarter printer in quality (and for the fact that you can buy it right now). We’re pretty sure there are going to be more than a few of these printers under the Saturnalia tree this year.

After a few weeks, [Ben] noticed a bit of smoke coming from the printer while the bed was preheating. This wasn’t blue pixie smoke, like you’d find from an exploded capacitor. There was a lot of smoke.

After a closer inspection and help from [Elecia White] from embedded.fm, the problem was traced to the power connector for the heated bed. The green, bromine-infused plastic for this connector was charred and there’s little doubt this could have caused a fire.

3D printing is a fantastic tool, and has enabled more hacks and builds over the last few years than we could have ever imagined. 3D printers are getting very good, and very cheap, and of course this will eventually mean someone losing their workshop to a printer fire. Until someone figures out how to build a ‘thermal fuse’ or something of that nature, 3D printers — from the high-end ones to the still very good Monoprice and Wanhao units — have the potential to start a fire.

END_OF_DOCUMENT_TOKEN_TO_BE_REPLACED 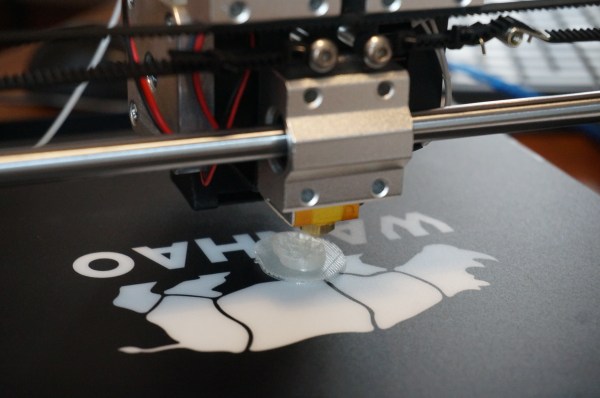 Is the Wanhao Duplicator the best printer on the market? Not at all. Is it a contender for best low-price printer?Definitely. If you consider it a low priced kit printer instead of a finished product then it’s possible that, in its price class, it is hands down the best out there.

For somewhere between 300 and 500 dollars, the Duplicator is a hell of a printer. Also selling under the name Cocoon and Maker Select, the printer is a thin folded sheet steel frame clone of the Prusa i3. I opened the box expecting the most flagrant cost cutting I could imagine. I figured the steel would be paper thin. The holes wouldn’t line up. I expected the connections to be improperly terminated. I expected a fire.

What I got was up and printing in under an hour. What I got was something designed by someone who cares, but with an obvious cost goal. As a bonus, it even printed pretty well. As mentioned, the basic shape of the frame is that of a Prusa i3. A horizontal bit holds the bed and y movement. A vertical bit is attached to the middle of that, making a T. It holds the X, Z, and nozzle.